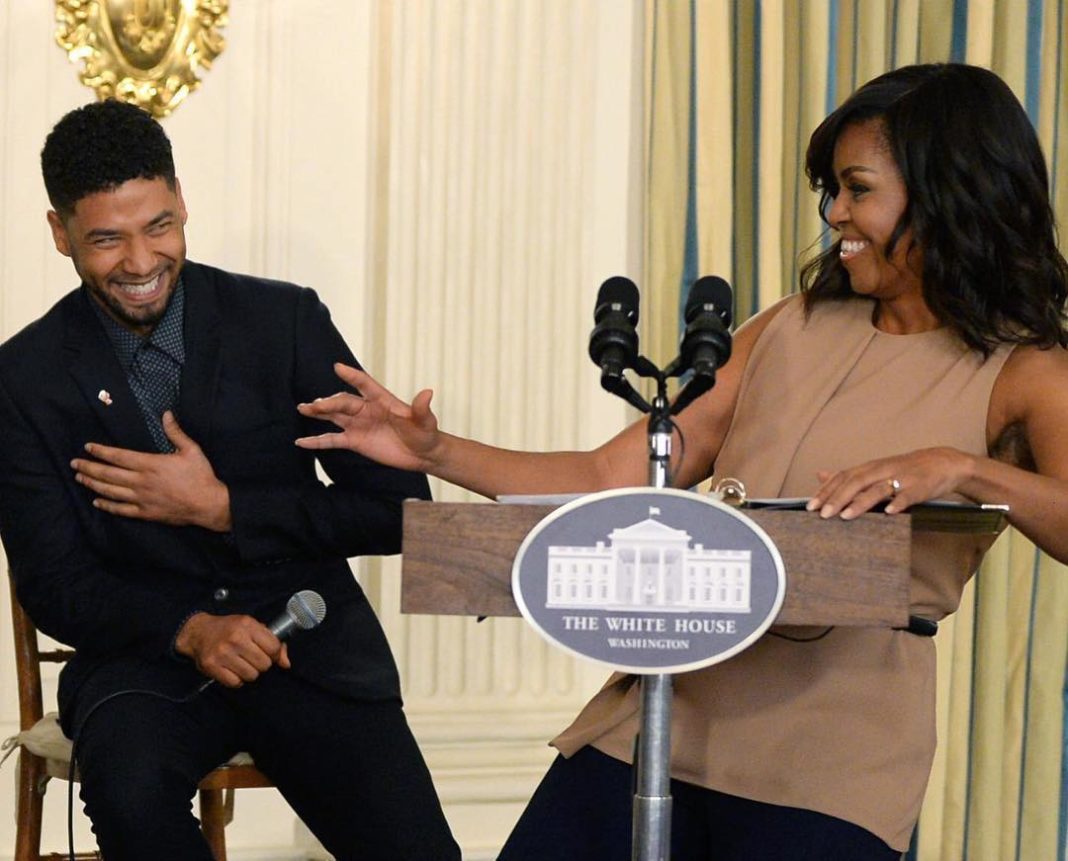 CHICAGO—More details have emerged regarding the Jussie Smollett case.

Chicago Police Department received a call approximately 2:40 am on January 29th by Smollett’s friend. When the police officers arrived, Smollett, who was still wearing the alleged noose around his neck, requested that the officers turn off their body cameras.

Jussie Smollett, 36, reported to Chicago Police Department (CPD) that he had been brutally attacked on January 29, 2018. Smollett told police officers that he was assaulted by Trump Supporters on his way back from walking to Subway Restaurant at 2:00 am. He had waited 40 minutes before the police were called.

Smollett claimed he was beaten, doused with a chemical substance, had a noose wrapped around his neck and was called racial and homophobic slurs and was told “This is MAGA country”. MAGA is referred to President Trump’s campaign theme, “Make America Great Again”. According to Smollett he was attacked by two men wearing ski masks and he was unable to identify their race.

Smollett told CPD that he had received a threatening letter from a return address of “M.A.G.A.” a week before.

Smollett is an openly gay black actor who is vocal against the Trump administration. Smollett told CPD that he was targeted due to his race and his sexual preference.

Brandon Moore, Smollett’s music manager, told police he was on the phone with Smollett at the time of the alleged attack and said he heard the attackers say “This is MAGA country”.

Smollett self-transported to the local hospital where he was listed in good condition, no broken bones but a scrape on his face.

Within hours of the reported incident, Smollett contacted TMZ with his story, adding that the attackers were two white men wearing MAGA hats and he was hospitalized after being brutally attacked, burned with a chemical and was suffering from a broken rib.

TMZ broadcasted the story within hours both on their television show and published it on their online presence. News spread quickly through social media.

A hospital worker came forward stating that Smollett didn’t have any broken bones and he was in “good condition”.

CPD immediately began to investigate this as a possible hate crime. They placed 12 detectives on the case, as well as worked closely with the FBI. Chicago has the largest amount of violent crimes in the nation. Detectives reviewed hundreds of hours of video tape and was able to find a video depicting two individuals, near the time of the reported incident. CPD made it known they were two persons of interest. The video appeared grainy without much to go on.

Lee Daniels, 59, is co-creator of Empire. Shortly after the attack, he posted a screen shot of a face-time conversation with Smollett which he later deleted but it had already been spread upon the internet. A few hours later he posted an online video in support of Smollett.

News outlets published the story without verifying facts, most stating it was a “vicious” or “brutal” attack and word quickly spread, even though many details didn’t add up. The main stream media reported this with emotion, tears and supported these allegations without doing due diligence.

Good Morning America’s Robin Roberts interviewed Smollett on February 14, 2019, sparking further outrage and attacks against anyone supporting the Trump administration. Smollett can be seen crying while he described the details and placing blame on “45”, referring to President Trump and his supporters. Smollett told Roberts that he was sure his attackers were the two persons of interest captured on the surveillance. He also stated he wanted justice.

Within hours of the ABC interview, CPD released information that they identified and located the persons of interest and were interviewing them. Ola and Abel Osundairo, brothers whose family immigrated from Nigeria had traveled to Nigeria the day of the attack and arrived back into O’Hare airport on the evening of February 13th. Police met them at the gates and took them into custody.

CPD had raided their home and recovered several items, including the receipt to the rope that was around Smollett’s neck, a magazine that was used to send the threatening letter to Smollett, bleach and other items.

After the Osundairo brothers were advised they are being charged for the battery, they proceeded to reveal the details of the orchestrated hoax. According to the two, Smollett paid them $3,500 with the promise to receive $500 more after they returned from Nigeria. They admitted to rehearsing the “attack” a few days before.

According to the brothers, Smollett was disappointed that a bigger deal wasn’t made of the threatening MAGA letter he had received and that is why he escalated the hoax into a false hate crime.

Olabinjo “Ola” Osundairo, 27,  met Smollett on the set of Empire. They became acquaintances. Ola’s brother, Abinbola “Abel”, 25,  began training Smollett for a music video. The three became friends prior to January 29th. At the time of the attack, Smollett was following Abel on Instagram, but Abel wasn’t following Smollett.

The Osundairo brothers are fully cooperating with authorities and there are no charges being filed against them as of February 19th. Smollett refused to admit it was staged and corroborate the Osundairo brothers’ testimony, stating through his reps that he was angered by the doubt and that the attack happened by people he knew.

Chicago Authorities have made it known they want to interview Smollett. His attorneys are “cooperating” yet Smollett has not agreed to be interviewed by CPD.

Those who have publicly blamed this attack on the Trump Administration and their supporters have not come forward to make comment or apologize for the accusations, assumptions and verbal attacks. Maxine Waters, Kamala Harris, Corey Booker, Alexandria Ocasio-Cortez, Don Lemon, CNN, MSNBC and others made emotional pleas, all blaming President Trump and even some, including Ellen Page accused Vice President, Mike Pence.

When questioned, Kamala Harris and Corey Booker, both said they want to wait until the facts are confirmed before they make a statement. Previously, they both said this was a “modern day lynching”.

CPD is working closely with the FBI to determine the next step.

Smollett plays the role of “Jamal” on the Fox television series, Empire. He is also an aspiring musician. His popularity on the IMDB scale remained at approximately 10,000 even though he was on Empire. After TMZ reported Smollett had been the victim of a race crime, his popularity had risen to 102 on IMDB.

Smollett had a scheduled concert at the well-known Troubadour, a small venue in West Hollywood. Before the incident ticket sales were slow to sell. After the media attention for the alleged racist attack, his show sold out.

Smollett can be seen pictured with Kamala Harris and other democratic politicians. He has attacked President Trump and his supporters publicly.

President Trump has continuously referred to the media as “Fake News” and as “Enemy of the People”. Social Media was flooded with concerns regarding the lack of journalistic integrity and the hate and divisiveness fake accusations are creating.

Smollett’s case is just one more on a long list of feigned “hate crimes” purported by the resistance movement. These stories garner wide-spread media and celebrity attention without confirming the facts and when details come out, the media fails to report that the incident turns out to be staged or a false accusation.

Other theories regarding why Smollett would stage a hate crime are swirling around the internet including those that accuse the likes of Kamala Harris and Lee Daniels as being behind the attack for political gain and for further fabrication that Trump’s America is a racist and hateful one. Harris currently has an anti-lynching bill in the works. Also, Smollett and his sister have ties with the Obamas and Kamala Harris.

At the time of publication, Jussie Smollett still maintains he is the victim of a hate crime and is angered that people are doubting him.

Credit goes to Rafer Weigel (@raferweigel) and Matt Finn (#mattfinnfnc) for reporting the clean facts, without bias, persuasion or omission. Follow them on Twitter to learn the truth first hand.