UNITED STATES−Musician Kanye West joined forces with Chick-Fil-A, and the Christian non-profit, Dream Center in an effort to feed the hungry across the city of Los Angeles.

Since mid-March, over 300,000 meals have been served through the Los Angeles Dream Center, which would be the equivalent of 11,000 meals a day for a month. The food is delivered to residents who are most in need, many of whom have been impacted by the Coronavirus outbreak.

The organization took action feeding the hungry  upon the closing of the Los Angeles Unified School District on March 13. 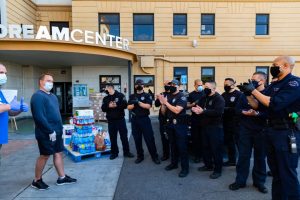 “Every morning I wake up and stand in the parking lot with our dedicated staff, I am blown away day after day, week after week, there is enough food to provide to folks that need it.”

Kanye is giving back in a BIG way!

In October 2019, West wrote a song about Chick-Fil-A referencing the establishment closing its doors on Sundays and raising children in the Christian faith.

According to the Chick-Fil-A website, each franchise supports the community where they reside. A Chick-Fil-A establishment in Atlanta, Georgia announced on April 21 that they will be funneling $10.8 million to assist those impacted by the Coronavirus.