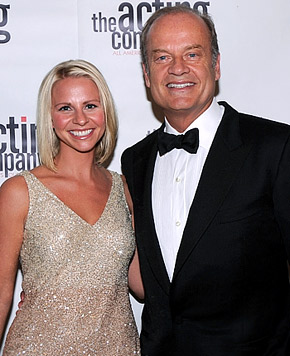 The cost of the wedding feast is reportedly $215 per person and featuresandouille en croute, slow-roasted turkey breast with chorizo stuffing and braised short-ribs.

For vegetarians, such as Walsh, the multi-course meal includes goat cheese truffles and wild mushroom risotto.

Bittersweet chocolate tart will be served with a wedding cake designed by Sylvia Weinstock.

Earlier in February, Grammer reached an agreement with former wife Camille, 42. The agreement was that after a long and strenuous legal dispute, property issues were to be settled at a later date. The Grammers had no prenuptial agreement.

In a statement Camille remarked, “I have a great many mixed feelings about today—I’m sad for what was, yet excited about the road ahead.”

Grammer, 55, rose to fame portraying the popular television character Frasier Crane, coincidentally the longest-running character in the history of television.  Frasier was a snobby psychiatrist, first featured on the hit sitcom “Cheers” and later on in the spin-off series, “Frasier.”

Camille, has been a beneficiary of the coattail effect, gaining notoriety on the reality series, “The Real Housewives of Beverly Hills.”

Previously, reconciliation was not considered an option in the Grammer’s marital problems. Camille persisted in making very targeted and cutting remarks about Grammer in the press, and Grammer intimated by way of his publicist that he did not find the remarks humorous.

In a prior statement, Grammer’s publicist said, “While it is not clear why Camille Grammer continues making public statements about her marriage to Kelsey, it is crystal clear that Kelsey will continue not responding, regardless of content.” Camille had accused her husband of liking to cross-dress, a remark that references Grammer’s present role in the Broadway musical “La Cage Aux Folles.”

The marital dispute began in 2010 when Grammer started seeing Kayte Walsh, 29, who had a miscarriage with Grammer’s baby.

There are still no indicators as to how Grammer’s children will be affected by the divorce, but the intention appears to be co-parenting. Camille also said in her Thursday statement that she hopes to improve their communication and co-parent their children. “I wish Kelsey and Kate love and happiness in their new marriage,” said Camille.

Camille Donatacci Grammer and Kelsey Grammer were married for 13 years.