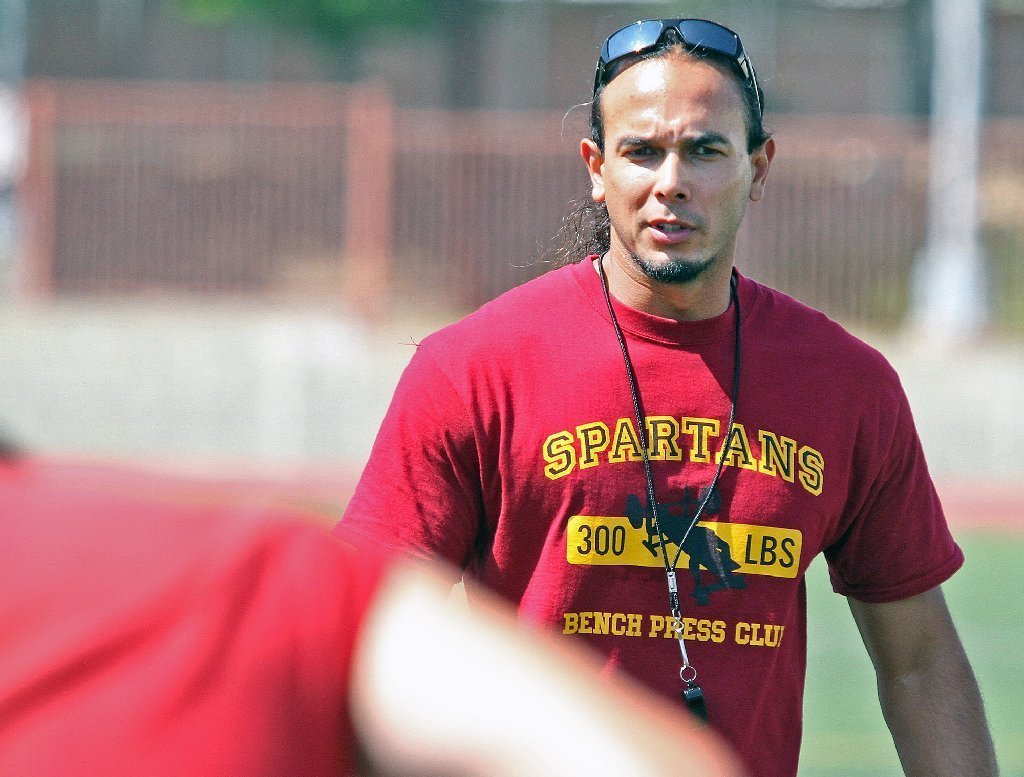 SANTA MONICA—Who doesn’t love a good time on the beach?

It’s one of the main attractions bringing tourists to the west coast shoreline every summer.

Just ask Ramsey Lambert, the new head football coach at Santa Monica High School. For this Hawaii native, living at the beach year round was exactly the motivation he needed to head west and find him his own little piece of home right here in Southern California.

The 32-year-old stepped down as the head football coach at La Cañada after just one memorable season with the Spartans. Prior to that, Lambert was an assistant coach at Silverado and Oak Hills High School in the High Desert Area.

“It’s both a personal and business move for me,” said Lambert. “I’m from Hawaii and on almost every weekend you’ll find me down in Santa Monica or Manhattan Beach or basically in the beach area. So, when a position opened up that allowed me an opportunity to coach and teach in the area, I felt I couldn’t pass it up.”

In his first head-coaching job, Lambert helped lead the Spartans to one of their finest seasons in recent memory. La Cañada finished 7-4 this past year, which translated into third place in the Rio Hondo League.

The win total marked the most victories for a Spartans team since Rich Wheeler’s 2005 squad finished 9-3. La Cañada also produced its first winning campaign since 2006 and advanced to the CIF postseason.

Lambert hopes to continue his winning ways in Santa Monica, leading a program with great football tradition. The Vikings went 5-6 overall and 3-2 in conference play last year, losing in the first round of the section playoffs.

One notable change, however, is the sizable difference in numbers between the two schools.

“They’re a bigger school – around 3, 000,” Lambert said. “That’s really different from La Cañada, whose numbers are a little bit down. That didn’t stop us from being competitive, but it’s a help to have bigger numbers.”

According to the latest CIF Southern Section figures, Santa Monica is right at 3,000 students, while La Cañada is listed at 1,432.

Ten people were on a selection committee that assessed over 30 applicants, interviewed eight potential candidates, and ultimately, hired Lambert to replace Travis Clark, who left Santa Monica in March for the same position at Lawndale High.

The committee included Samohi athletic director Al Trundle, an administrator, a former coach (not Clark) and an assistant coach as well as three players, a parent, an athletics official and a representative of the Viking Fund, the school’s athletics booster club.

“We warmly welcome Ramsey to the Samohi family,” said school house principal Elias Miles in a statement. “After assessing our school and school district’s vision, along with the core values of our community, we created a list of characteristics and qualities we wanted in our next head coach. We conducted an extensive coaching search that identified Ramsey as the perfect person to lead our program.”

Lambert, who was born in Hawaii and raised in California, played football at Hesperia High and turned to coaching after sustaining an injury at Victor Valley College in Victorville. He studied kinesiology at the University of Hawaii.

Lambert will be employed full-time by the Santa Monica-Malibu school district and will be teaching a freshman seminar in addition to his coaching duties.

The second-year head coach made his new position Twitter official, changing his handle from @LCfootballcoach to @SamohiFBcoach shortly after the hire.

He took to his new account to express his excitement by tweeting: “Turning in my Mohawk for Viking horns. Thank you @lacanadasports you will be missed. Blessed to be the new HC at Samohi @GoSamohi.”