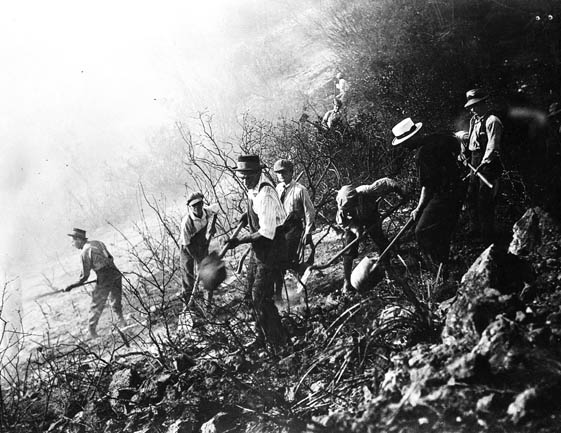 LAUREL CANYON—Sunlight warms the ground during the day, which creates air currents that travel uphill. At night the land cools, creating air currents that travel downhill. Our brush fires are fanned by these winds and often follow these air currents over the hills.  That explains why our fires can change direction quickly, making them very dangerous.  We silently pray for no Santa Ana winds to whip fires around faster than their usual 6.7 mph.

I came across this picture of firefighters in 1905 fighting a brush fire on Lookout Mount with hand tools. Now that looks like tough work. I had recently interviewed an old Laurel Canyon resident who said: “Oh yeah, we had fires up here all the time.”  I thought “all the time” might be an exaggeration.

The first recorded fire appears to be the one on Lookout Mount that is memorialized by this picture.

The next fire story was dated 1911 in the South Canyon section of LaurelCanyon. That property was owned by the Lookout Mountain Land Company, and was located about a half mile away from Lookout Mountain. The fire raged for three hours threatening 30 “pretty” bungalows. The fire crew created fire breaks, and shoveled dirt on the flames and poured water from “garden hoses.”  Boys had made an Indian camp and the campfire got out of hand.

The next major Laurel Canyon fire destroyed the famous Lookout Mountain Inn in 1918, when about 200 acres, once again in the South Canyon, were ablaze.  The newspaper noted a bunch of boys had a sausage bake in theSherman foothills and started this fire.  Chemicals were reported to have been used to fight the fire. This fire threatened the West Canyon, the LowerLaurel Canyon with walls of flames as high as 300 feet. The AAA was called and volunteers arrived with cars to ferry the fire fighters around the area.  In the frantic effort to evacuate the LA Times reported trucks rattling downLaurel Canyon spilling small furniture and talking-machine records on the road as they scrambled down the canyon.  The fire was finally “stopped at the mouth of Horseshoe Canyon and saved several rows of palatial homes.”

Until 1921 the LA Fire Department depended on Fire trucks pulled by horses. In 1924, DWP opened Mountain Patrols. A Battalion Chief, firefighters and civilian employees used horses and automobiles to patrol the area and make the initial attack on any small fire.

In June of 1929, a fire fight began in the hills south of Mulholland.  Fire fighters credited the installation of “fire hydrants placed at intervals through the brush by farsighted property owners, and for one of the few times on record that a brush fire was fought largely with [a] fire hose … Fireman admitted that without the hydrants the fire could not have been controlled.”

In July of 1929, another Laurel Canyon fire burned five acres in the SouthCanyon near 2138 Stanley Hills Drive.  The fire was controlled with chemicals.  No fire hydrants were available.

The list of fires goes on and on – she wasn’t exaggerating.  Fire hydrants privately installed?  That was a big surprise.