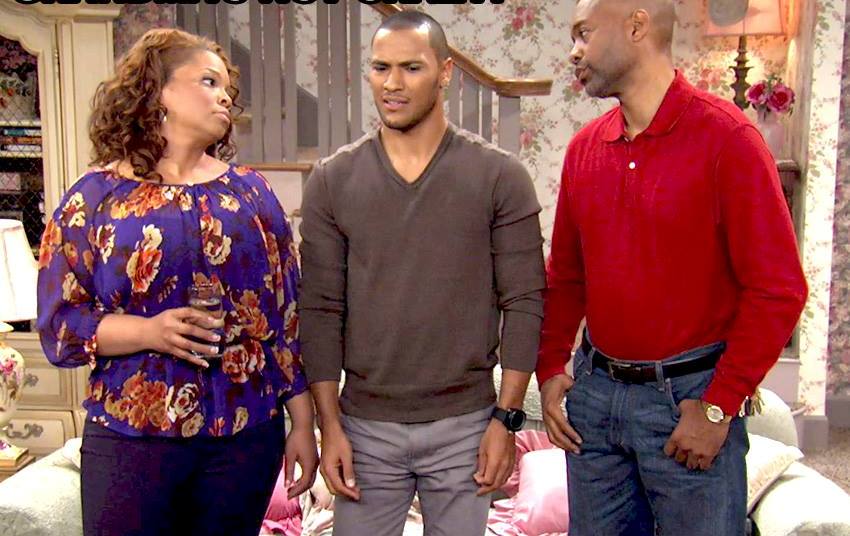 HOLLYWOOD—Let’s face it, the work week can be a tough way to say the least, so there’s nothing better than a hearty laugh to take one’s mind off of the constant stressors. I’ve recently come accustomed to what I call ”˜Love Thy Wednesday’ as it’s the day of comedy for me.  Tyler Perry’s “Love Thy Neighbor” has become a fave of mine that I look forward to every Wednesday to enjoy a few good laughs and an escape, not commonly seen.

Perry whose known for having staple characters like his gun-totting Madea, doesn’t disappoint with this series, with fast-talking, straight-to-the point and hilarious Hattie (Patrice Lovely). Hattie is the matriarch of this series that follows her family and their group of friends who learn to love one another in distressing times of need. The reason I love Hattie so much is the honesty this character brings to the show; you may not want to hear it, but it strikes a cord every time she says it.

No one knows this better than her daughter, Linda (Kendra C. Johnson) who finds herself back at her mother’s home after discovering that her husband cheated on her. Linda is what some would call a typical housewife, so Hattie teaches her daughter a few things about the real-world. Life isn’t easy, so the series gives the audience a slice of life that may be all too familiar to some of us.

Speaking of that, a character many college graduates may identify with is Linda’s son, Danny (Andre Hall). First and foremost, Danny is indeed a ”˜mama’s boy.’ He loves his mother dearly and would do just about anything for her, not to mention she’d do anything for him.  It’s great to see this sort of relationship on television, as it is not always seen.  Danny is one of those characters who is ultra-sensitive, an idealist and a respectable young man, so to see him interact with people not on his same level is hilarious in so many ways words can’t describe it.

The first episode was such a reminder for me of the tough reality that a college education doesn’t guarantee a job, but Ms. Hattie gives her grandson a hard dose of reality by FORCING him to look for employment. In life you get knocked down, but the key is don’t be afraid to get back up or you’ll never know what is out there waiting for you.

Two additional scene stealers on the series include Drew (Darmirra Brunson) and Sam (Jonathan Chase). These characters are more alike than what some would expect because of their over the top antics.  Drew and Sam, work alongside Danny at an internet design firm.  Sam is the polar opposite of Danny, which explains why the two get into so many heated battles or confrontations; Sam is a wild man, Danny not so much. So there is a balance to the duo who becomes roommates. Danny’s personality rubs off on Sam, and vice versa. Let’s just say Sam got a taste of his own medicine about being a womanizer when he falls into the sheets of Ms. Hattie.

Let’s look at Drew; she is a woman that has a major crush on Danny, he knows it, but quite never acknowledges it. I’m secretly waiting for the moment where these two wound up in bed together; I see it happening, its more so a question of what takes place for that to happen. Brunson is wickedly funny as the sarcastic, but also self-aware character. That episode where she stuffed her bra and butt to compete with her boss, and roommate, was hands down one of the funniest things on the show.  She has a way of telling the truth with just enough kookiness that will create laugh riots in the house.

The best thing about Tyler Perry’s “Love Thy Neighbor” is that at its core it’s a series about the importance of family and friends, told from a comedic point of view.  There is a character that each and everyone who watches the series can identify with, in addition to pinpointing one of the characters with a family member or friend they know. This series works so well because the chemistry is on point, the acting is stellar in my opinion, and it’s damn funny. All and all, “Love Thy Neighbor” has turned into a guilty pleasure of mine that helps me get over that hump during a rough work week. Sometimes a good laugh is all you need.  Tyler Perry’s “Love Thy Neighbor” airs Wednesdays at 9:00 p.m. on the OWN network.