UNITED STATES−On Friday, February 7, Lt. Col. Alexander Vindman was relieved of his duties and escorted off of the property of the White House ending his position as White House National Security Council. It was previously reported that Vindman was expected to leave his post following the acquittal of President Donald Trump. Vindman testified against the President during the impeachment trial.

During the impeachment inquiry, he raised concerns regarding the July 25 phone call between President Trump and Ukrainian President Volodymyr Zelensky. 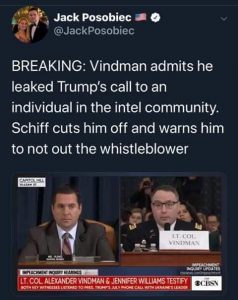 The witness while being questioned by Congressman Devin Nunes admitted to Congress that he leaked the contents of President Trump’s call to the “whistleblower.” Chairman Adam Schiff cut his testimony short to remind Vindman not to out the whistleblower.

“I was concerned by the call,” said Vindman. “What I heard was inappropriate…. It is improper for the President of the United States to demand a foreign government investigate a U.S. citizen and a political opponent.”

Vindman’s supervisor and former advisor to the President. Tim Morrison told reporters that, “I had concerns about Lt. Col. Vindman’s Judgement.” Morrison testified that others had concerns as well.

House Intelligence Chairman Jerry Nadler disagreed with the dismissal of Vindman.
“People who disagree with me are not scum,” Nadler told reporters. “It’s more than settling scores. This is a subversion of justice.”

According to reports, Lt. Col Vindman was reassigned to the Pentagon. His twin brother, Ambassador Gordon Sondland was also relieved of his duties.

The Cerebral Conservative wrote, “Of course he was going to be reassigned before his planned departure in July. After testifying against the President, he was no longer going to be trusted by the Administration. I would have packed by box after my testimony if I was him.”