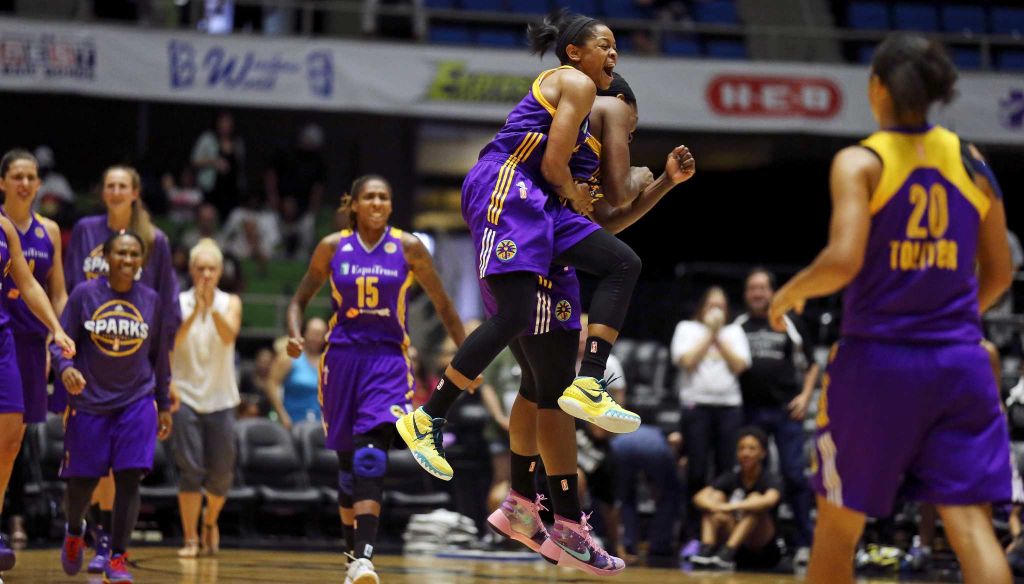 UNITED STATES—Four-time WNBA All-Star Alana Beard has dealt with some pretty untimely injuries throughout her 11-year professional career and the latest one proved to be no different.

Beard, 33, strained her quadriceps muscle just eight minutes after tip-off Sunday night and did not return to the game.

The short-handed Los Angeles Sparks went on to lose, 72-64, to the Minnesota Lynx at Target Center in Minneapolis.

“Unfortunately, I’ve been in this position a lot,” Beard, 33, said in a recent interview with ESPN’s Mechelle Voepel.”But at the same time, I keep coming back. I keep working through it.”

Beard, a 5 foot and 11 inch guard/forward, averaged 16.2 points, 4.2 rebounds 2.9 assists and 1.9 steals per game in six seasons with the Washington Mystics before missing the 2010 and 2011 campaigns with ankle and foot injuries, respectively. Prior to her injuries, Beard appeared in 193 of a possible 204 regular-season dating back to her rookie campaign of 2004, starting 192.

In 2012, Beard signed a free agent contract with the Sparks and has been an integral piece to the teams core group of players ever since.

In 2015, Beard suffered another foot injury just two games into the season and was once again in dress clothes for the next 14 games. She recently returned to action in the Sparks first game after the All-Star break, along with two-time MVP Candace Parker, who took the first half of the year off to rest and spend time with her family.

In eight games this season – but especially through the last six contests – Beard had been playing arguably the best basketball she’s played in a Sparks uniform, averaging 11.0 points, 4.0 rebounds, 3.3 assists and 1.3 steals

Her mid-range game is as precise as its ever been and she provides great length defensively for head coach Brian Agler, who is well known in the league for demanding consistent team defense from his players.

Most importantly, Beard brings a leadership piece that Agler would say is the most invaluable part of her game.

“She brings that maturity, toughness and focus that you have to have to play at a high level in this league,” Agler said to ESPN’s Mechelle Voepel.

A healthy Sparks team won four straight games heading into the matchup against the Lynx, including a 83-61 loss—the worst of the season for Minnesota—at Staples Center on August 4.

Agler’s team followed that up with a 84-57 blowout win over the Tulsa Shock on August 6.

Without Beard in the line-up for most of the game against the Lynx, Minnesota’s size proved to be too much and the Sparks couldn’t recover from a sloppy start after losing their emotional leader.

Nneka Ogumike led the Sparks, who are currently in the fourth and final playoff spot in the Western Conference, with 18 points on 7-9 shooting in the loss.