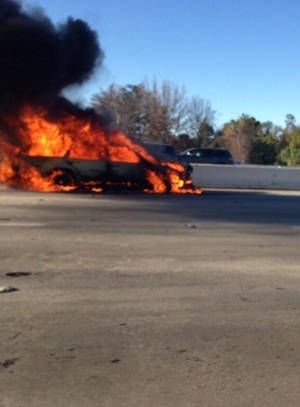 SHERMAN OAKS — A man saved from a car crash on December 25, 2013 was arrested following the incident for driving under the influence.

The crash involved a 72-year-old male who drove his Mercedes Benz station wagon into the right shoulder wall and then into the center divider of the 405 freeway on its northbound lanes, according to Officer Kevin Tao of the California Highway Patrol. The accident, which took place south of the Ventura Boulevard exit, was witnessed by LAPD Bomb Squad Technician Officer Don Thompson who exited his own vehicle to help rescue the man from his car that burst into flames following the violent crash.

Battalion Chief Glenn Miyagishima of the Los Angeles Fire Department was traveling southbound on the 405 when he jumped into action to aid Officer Thompson and two other civilians who pulled the man from his car and over the center divider to safety on the southbound lanes. Officer Thompson was treated for first and second degree burns as well as smoke inhalation, but he was later released.

The suspect, who remains nameless at the printing of this story, was taken to UCLA Medical Center and treated for neck and back pains. After being released from the hospital, he was arrested for suspicion of driving under the influence. The crash remains under investigation by the West Valley CHP Area Office.