UNITED STATES—Dr. Bill Kirby, Mayor of Auburn, California offered to resign after sending out a meme on social media comparing the KKK with supporters of the President of the United States. 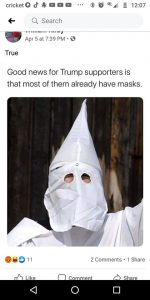 Mayor Kirby is a physician by trade, a pilot, and a member of the Auburn community for nearly 30 years. He announced during a City Council meeting on Monday, April 13 that he would be “handing over his gavel” at the next meeting scheduled for April 27.

Kirby indicated in the post speaking of wearing masks in a pandemic and wrote: “Good thing for trump supporters. They already have masks.”

One person responded “[Mayor Kirby] should respect the office.”

“…now who is unhappy. I just want trump and those who support him to leave the U.S. or die because it will never be trump country.”