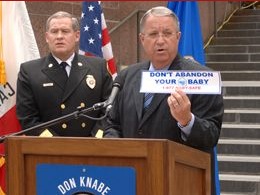 WOODLAND HILLS—Don Knabe, the Supervisor of the Fourth District of the County of Los Angeles, reports that the county’s Safe Surrender Program has led to 2010’s fourth safe surrender of another newborn.  The infant was appropriately given up by her mother, who informed hospital staff members that she wanted to surrender her.  This is the most recent safe surrender that has occurred at a Woodland Hills hospital.

The mother of the infant reportedly delivered her daughter at the hospital and told staff members about her decision to relinquish care of her.  The healthy baby girl is in protective custody and will be considered for adoption by a family found suitable by the Department of Children and Family Services.

“This case could have ended in tragedy, but because of the Safe Surrender program, this baby girl has a long life ahead of her,” Knabe stated in a press release at his website.  “I am happy this mother made the right choice for her baby.”

The Safe Surrender program (also called the Safe Haven Law or Newborn Abandonment Law) was initially signed into law by Governor Davis in September of 2000, and became active on January 1, 2001. The goal of the program is to protect infants from injury or death from abandonment, and legally allows individuals to surrender an infant that is no older than three days old in confidentiality.  The newborn may be safely given up at any hospital emergency room or designated Safe Surrender Site.  (A list of Safe Surrender Sites is available at http://www.babysafela.org/site.htm).  The program assures those who decide to give up the infant that they will not face arrest or prosecution for child abandonment as long as the baby shows no signs of abuse or neglect.

This safe surrender marks the 80th since the law had taken effect.  The program founded by Supervisor Knabe and approved unanimously by the Board of Supervisors in 2001. A representative with the Los Angeles County informed Canyon News that information about how to safely surrender an infant is available at babysafela.org. The toll free safely surrendered baby hotline is 1-877-BABY-SAFE, (1-877-222-9723).