PORTLAND, OR—It has been a month since an Antifa attack in Portland, Oregon, against a conservative journalist and reporter Andy Ngo. Ngo was beaten and robbed by at least a dozen masked men on June 29 while covering a protest by Proud Boys and a counter-protest by Antifa.

Ngo was hospitalized with a brain hemorrhage, head contusions, cuts around the eyes and a ripped ear. The journalist reached out on social media stating no arrests have been made as of July 19 stating:

“Please join me in my effort to seek justice.” 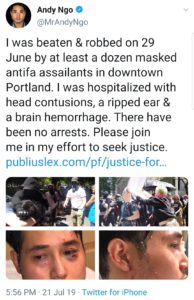 Ngo is an independent journalist known for exposing the violence of the hate group Antifa. According to reports,  Ngo noted that he was targeted by the anti-fascist hate group, Antifa.

Authorities at the scene of the crime indicated that people were “milkshaked,” where they were covered in a thick substance that appeared to have cement mixed with it that would harden on their victims.

Antifa, which is short for antifascist are members of an extreme left-wing group with violent tendencies. Antifa will show up at protests in opposition against right-wing protests.

President Donald Trump, Texas Senator Ted Cruz, Louisiana Senator Bill Cassidy and others have reportedly been seeking to have Antifa declared as a terrorist organization.

Video footage with an interview by TRT World, depicts the interviewer speaking with both a member of Antifa named “Kit” and a conservative named “Brandon.”  Kit adamantly defends the actions of Antifa.  He called out President Trump noting they have to retaliate from white supremacists, Proud Boys, and people advocating for genocide.

Brandon, who claimed to have been a victim of Antifa at one time mentioned Ngo being attacked. He attempted to defend Republicans saying they don’t go out and physically attack people in Obama shirts. Kit disagreed and asked not to interrupt.  Brandon called Antifa violent and dangerous saying that if Antifa disagrees with Republicans they are called white supremacists and risk being attacked with baseball bats and chains.

Both Kit and Brandon stood firm with their opinions Kit claimed freedom of speech, while Brandon stated they’re so worried about their freedom of speech they should take their masks off and identify who they are. The conversation between the two ended as it become antagonistic for the interviewer.