CALIFORNIA—On Sunday, May 15, at 1:26 p.m., the Orange County Sheriff’s Department responded to a call of shots fired at Geneva Presbyterian Church in Laguna Woods during a luncheon they were hosting following morning service.

Upon arriving at the scene, authorities verified via Twitter that one parishioner had been shot dead and five others were injured including four men and one woman all between the ages of 66 and 92 years of age. They are in critical condition.

According to OC Sheriff Jeff Hallock, parishioners were able to detain the shooter by “hogtying him,” with an extension cord. Two weapons were also taken away from the suspect.

The name of the suspect has not yet been released. Undersheriff Hallock described the suspect as an Asian male in his 60s. Hallock indicated that it is not believed that the suspect is from the area. There is an active investigation to find out the suspect’s city of origin and if he has any connection to the church. Footage was posted via the Citizen App.

During a press conference, it was stated that the OC Sheriff’s office was assisted by the Santa Ana Police Department and they are working in conjunction with the State Police and the FBI in their investigations. 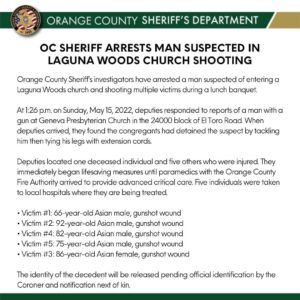 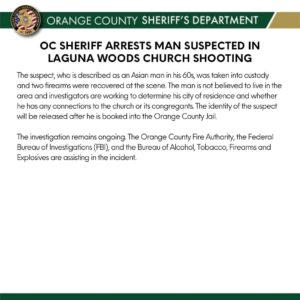 The Office of Alcohol, Tobacco, and Firearms (ATF) is currently running a trace on the weapons confiscated at the scene of the crime.

When the Orange County Supervisor of the 5th District spoke to the press, she reminded her listeners that the shooting came one day after a shooting in Buffalo, New York, where 10 people were killed stating:

“We too are now dealing with people shot at their place of worship here in Laguna Woods.”

Mark Whitlock, who is the pastor of another area church, put out a call to prayer on Facebook reading:

“One person killed and several shot. Praying for friends and family at Geneva Presbyterian Church in the city of Laguna Woods, CA. I led a church near them.”