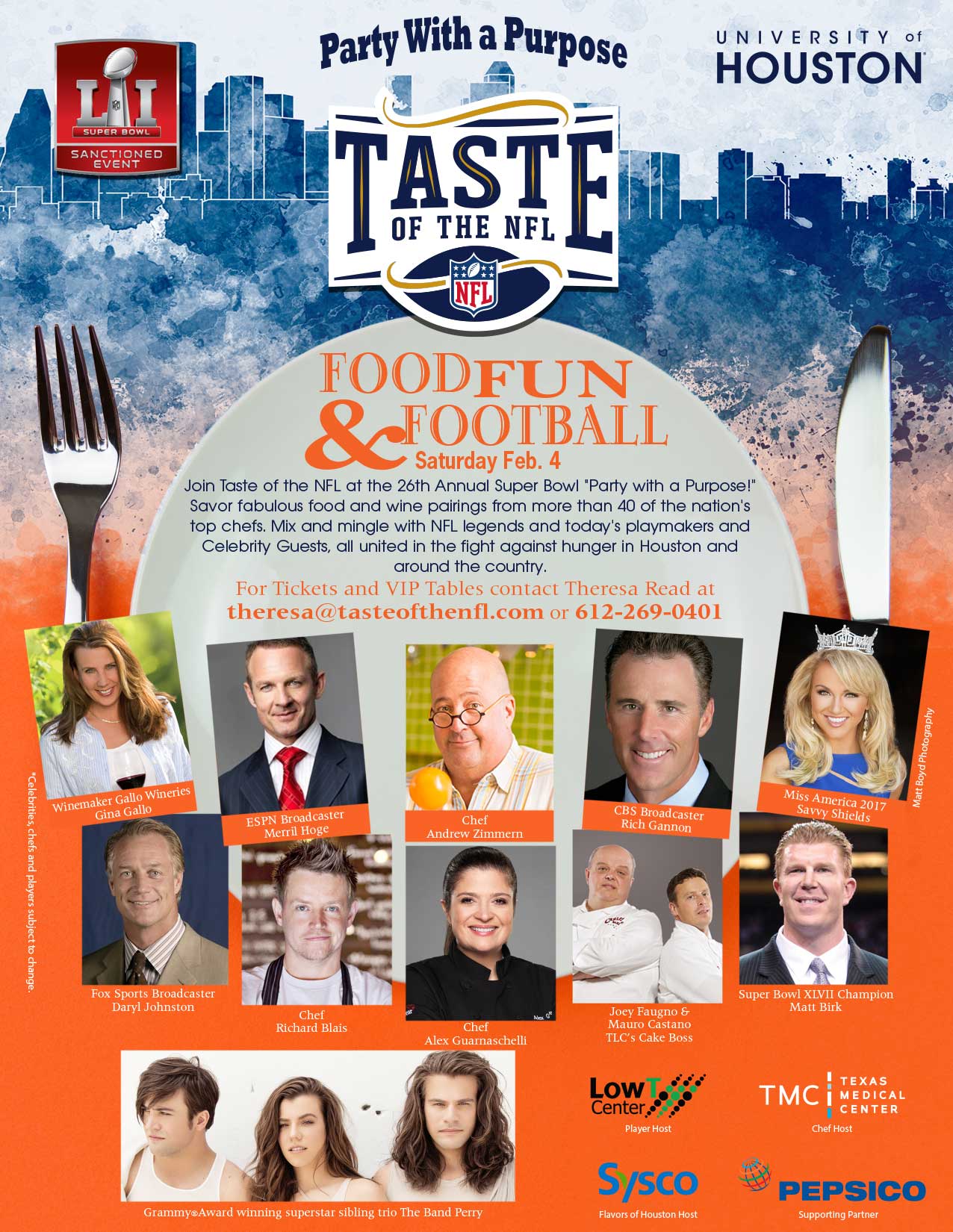 HOUSTON,TX—Chef Steve Samson will represent the Los Angeles Rams on Saturday, February 4, the eve of Super Bowl LI, at the University of Texas, at Party With A Purpose, a gut-busting, foodies Oasis.

Taste of the NFL’s annual strolling wine and food event features a chef from each NFL city serving their SIGNATURE dish alongside a current or alumni NFL PLAYER. The result? Over 35 plus food stations where guests can sample fine cuisine, meet and mingle with renowned chefs and NFL greats and participate in this worthy cause.

The NFL’s greatest players, (current, alumni and Hall Of Fame) support and/or participate in their local team events or the Super Bowl eve event: former Rams Defensive Tackle and current Director of Player Engagement La’roi Glover, will be on hand to sign autographs and mingle with fans and friends over fantastic pasta impeccably paired with wine.

The Band Perry will be performing at Taste Of The NFL bash. Party With A Purpose will be held at the University of Houston, beginning at 7:00 p.m. and is an out of this world experience!

Samson will offer up Maltagliata pasta, porcini mushrooms Dandelion greens paired with Mac Murray Estates Vineyards, Pinot Noir. Wanting to return to his hometown of Los Angeles, Samson partnered with his wife, Dina Samson to open Sotto in 2011. It achieved imediate acclaim by being named me of Esquire magazines, “Best New Restaurant In America,” and Los Angeles magazine’s”#1 Best New Restaurant.” After 4 years Sotto remains as popular ever, largely because chef Steve  has remained committed as ever to tradition and craft.

As you read this, millions of people in America are struggling with hunger. In fact, 1 out of 6 people in our country face this serious issue – many of them are children and seniors. For over 25 years, Taste of the NFL has been working to kick hunger. While we’re proud to report that we’ve raised more than $25 million during that time.

The real winners will be the families who benefit from Taste Of The NFL.