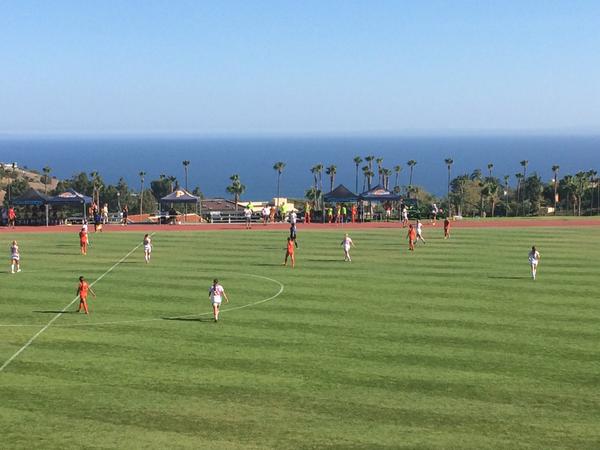 MALIBU—The No. 10 Pepperdine women’s soccer team beat No. 13 Wisconsin 2-0 on Friday, August 28, at home, improving their overall record to 3-0 after their third straight shutout win to begin the 2015 season.

The Waves scored both goals in the first half—the first in the 27th minute and the second coming just two minutes later—en route to the win, making it the first time since 2004 that Pepperdine has started the season with three consecutive shutout wins.

Senior defender Courtney Assumma scored the first goal on a set piece and freshman forward Michelle Maemone scored her first career goal for the Waves to give Pepperdine the 2-0 lead.

“This is a really good result for us,” said head coach Tim Ward. “If you had told me last week that we’d win this game by two goals, I wouldn’t have believed you because Wisconsin’s a good team. This was a wide-open game and we probably could have had two more goals, but we also had to make some really big stops to keep them out of the net.”

Assumma’s goal came on a set piece following a foul call on Wisconsin just outside the penalty area. She hit a perfect ball over the defense and into the left side of the net for her first goal of the season.

“Courtney will probably give credit to her club coach for that one, because he taught her that curling ball,” said Ward. “We found out she could do that a while back and when it’s in her range we let her have at it.”

The Badgers had a chance to cut the lead in half around the 35th minute on a loose ball in front of the Waves net, but junior goalkeeper Hannah Seabert was the first to ball and kicked it out of the box. Seabert finished the game with seven saves and has not allowed a goal in 275:17 minutes of play to start the season.

Wisconsin had another close-call in the second half on a couple strikes deep in the box, but Seabert responded every time.

The Waves controlled much of the game against a solid Wisconsin team that had won two straight games to start the season. Pepperdine had 18 shots, seven on goal compared to the Badgers 11 shots, seven on goal. Ward’s team also had the edge on the corner kick total, 12-2.

The Waves scored a big 2-0 win over #13 Wisconsin on Friday thanks to first-half goals! Recap: http://t.co/JZjn8W7C5h pic.twitter.com/Pr79TmTonc