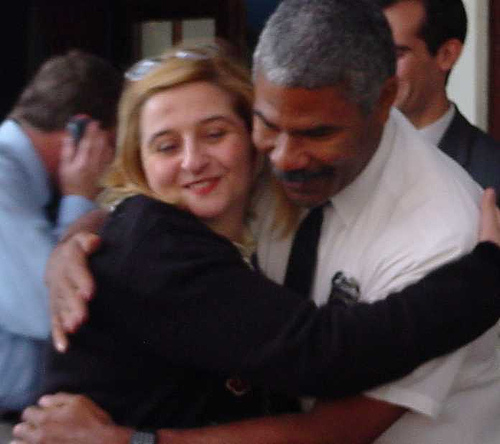 HOLLYWOOD—HELLO AMERICA!  Those of us who have been a part of the industry for many years, find ourselves wondering who might be stepping in the shoes of the likes of Bob Hope, Milton Berle or even Red Skelton.  Well, after watching some very funny guys who claim the stage at the Comedy Store, the Laugh Factory and the Improv, I predict that Robert Amour will definitely be a hot contender for any of those guys of the past.  He’s a class act that is, without question, ready to take flight and those of us who love this business cannot wait.  The interview with Robert was easy and quite compelling.

Q: What makes you laugh?

A: “I got my sense of humor from my Dad, Bob Armour. He was a stay-at-home Dad, so I spent a lot of time talking to him and laughing. He actually fuels my stand-up even though he gets stage fright if he has to perform. He is the funniest guy I know.”

Q: What kind of characters make you feel that being an actor is the only thing that has meaning for you?

Q: How do you know when you have connected with an audience?

A: “My favorite part of being an actor is taking an audience out of reality for a few hours. I know when I have connected with an audience when afterward or on the street someone will come up to me and ask me questions as if I’m really that character. I remember one time when I was in high school we were doing the play ‘The Crucible’ in which I portrayed Reverend Parris. My character was mean and angry throughout the show. This one audience member came up to me afterward and in all seriousness asked me ‘Why couldn’t they hang you? You are a jerk!’ and then walked away. I loved it! I knew that I did my job as an actor.”

Q:  Do you remember the first time when you realized that being an actor was the only quest that had any meaning for you? What did you do to explore this discovery or feeling?

A: “I remember it very clearly. It was at the church where we were rehearsing for my very first show, ‘Grease.’ I was about 14 years old. I went outside with some other actors to rehearse some scenes. Right in the middle of the scene the actress I was working with stopped stared at me and said ‘That was really good, Robert’. I remember thinking to myself, how just that little compliment, made me feel so accomplished! I knew that every chance from that moment on I need to get up on stage, or in front of a camera, as much as possible.”

Q: When first appearing on stage, how did you feel when hearing the applause or reaction from the audience?

A: “Scared and amazing. I really didn’t know what to expect at my first moments on stage. My very first line on stage was ‘Ah man! I got old lady Lynch for English class again! She hates my guts!’ The problem was I couldn’t say English class. It always came out English clash. The audience laughed and I knew that no matter what I said or did, the audience was going to follow us on our little adventure.”

Q: Who were some of your role models in films or in the theater? How did they affect how you approached comedy or dramatic character building?

A: “My role models have always been my friends when it came to performing. I have a lot of actor friends and they make me strive for more. When I see one of my friends on television or on stage or in a movie, I’m happy for them and say ‘next time it will be me they’re watching!'”

Q: What is the dramatic process of “discovery” for you when searching for the center of the character, whether it be comedy or drama?

A: “I’m a very ‘real’ actor when it comes to finding a character within. I look at people I know or whom I have met, to find the mindset of the character. Like I said, I like to make people believe I’m really that character. About a year ago, I played a character who was a Scottish bartender in the year 1868, who wasn’t really Scottish. I looked at articles on multiple personalities to find that character.”

Q: How difficult is it to become noticed in Hollywood, especially with all the competition, and does it make a difference in how you go after what you want as a performer?

A: “It is soooooooo difficult! For me ”¦ it has been a roller coaster. My very first big audition for a movie was when I was 15 years old and I booked it. It was a movie called ‘Holes’, which starred my old buddy from school, Shia LaBeouf. I thought it was going to launch my career. Unfortunately, I got cut out and only put on the DVD extra’s. I was crushed, but it kept me striving to come out on top again. There are sooooo many actors out there, with my same look and ability. It honestly makes me puff out my chest and further push me to find out for myself, why I’m better and then go for it.”

Q: What makes you different from many other hopefuls in the business who are also struggling to get that one big break?

A: “My knowledge of how the business works. I have worked not only as an actor but as a lighting designer, a sound designer, a camera operator, a director, a producer, a make-up artist, a stage manager and a few other small jobs. I have really strived to know each and every part of the business. I believe it makes me a better performer knowing how I get to perform on stage or film. I always remember something my father said once, ‘For every one actor, there are 100 crew members.’ Now I know what all those people do for me when I’m performing. I understand why I have to turn left at this point or look this way or that way.

Q: When you look in the mirror, what do you really see?