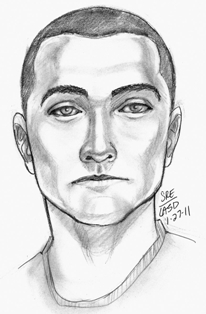 SANTA MONICA—On February 8, the Santa Monica Police Department released a sketch of a kidnapping suspect. Authorities are asking for the public’s assistance.

The kidnapping attempt occurred on January 24, at 8:20 a.m., when a female minor was almost kidnapped on the 3100 block of Pennsylvania Avenue by a white adult male who engaged the minor in conversation. The suspect then proceeded to accost the victim and attempted to scuttle her into the backseat of a vehicle where an accomplice awaited.

Managing to free herself, the victim made her way to the New Roads School, where police were contacted and a full report was made to local authorities.  The victim was uninjured.

Authorities have described the suspect as a white male in his 20s who is about 5 feet 8 inches tall with a slim build. “The suspect was wearing a gray sweatshirt, light blue jeans and tennis shoes,” stated Sergeant Jay Trisler in the press release.  An artist’s rendering has been released based on the description given by the victim.