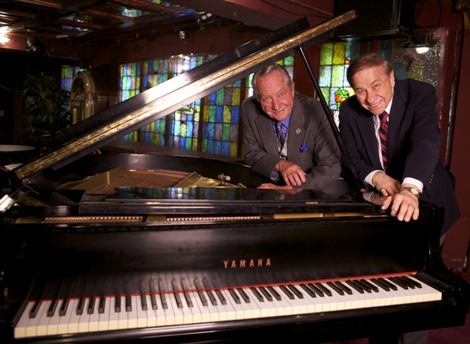 WhatsApp
Facebook
Twitter
Pinterest
ReddIt
Tumblr
Email
Print
HOLLYWOOD—Over the years the Sherman Brothers and Milt Larsen have been lifelong friends. Larsen is best known as a TV writer and the founder of the famous private club for magicians in Hollywood. Richard Sherman is half of the famed songwriting and musical brothers team that has produced some of the most famous lyrics for movies and TV over the decades. The Beverly Hills native is also a veteran of WWII. Not too many people know that Richard and Milt collaborated on songs before they found success in their respective careers.
They wrote their first song “Concert in the Park” in 1955, followed by a roaring ’20s musical in 1957 and a cult comedy classic LP “Smash Flops” in 1959. The Sherman Brothers hit their stride in the mid 1960s under contract with Walt Disney, winning two OscarsÂ® in 1965 for Best Song “Chim Chim Cheree” and best score for “Mary Poppins.”
Milt Larsen pursued his career as writer and entrepreneur (Magic Castle, Mayfair Music Hall, Variety Arts Theater and Caesars Magical Empire) and, at the same time, enjoyed writing songs with Richard Sherman. In 1972, the Sherman Brothers wrote the songs and Milt Larsen and the late Robert Lauher wrote the book for the WWII musical, “Victory Canteen,” at Hollywood’s Ivar Theater. Most of the Sherman and Larsen songs were written for comedy albums and Milt’s various stage revues. They have written the words and music for over 200 songs.

One of their projects was an idea for a musical based on the lives of legendary comedians Joe Weber and Lew Fields. In 1985, Larsen produced a version of the show “Little Old Broadway” at his Variety Arts Center in Los Angeles. Although the play got good reviews and even won awards, it was not working as a fully developed musical. Both Richard and Milt were very busy with their various careers and put the musical on the shelf for the next several years. One of Larsen’s associates, Joseph Hoffman, remembered the show and uncovered a little known fact. George M. Cohan worked for Weber and Fields when he was a young man. He helped them fight the powerful syndicate. Hoffmann, Sherman and Larsen collaborated on a new book and the show had a tryout production at the University of Texas, Arlington. After the usual re-writes the musical was re-named “Pazzazz!” and a full-scale production was mounted. After performances at Citrus College the musical became the first Broadway type musical to play the newly restored multi-million dollar Granada Theater in Santa Barbara.

After years in the making, the new production of “Pazzazz!” directed and choreographed by award winning veteran Walter Painter, will premiere at the historic Lobero Theatre in Santa Barbara on March 25, 26 and 27. It will then be offered to West Coast performing arts centers through Larsen’s production partner Terry M. Hill and Associates. Larsen and Hill have a track record for producing family friendly stage shows such as the all-star magic revue “It’s Magic!” now in its 55th year.