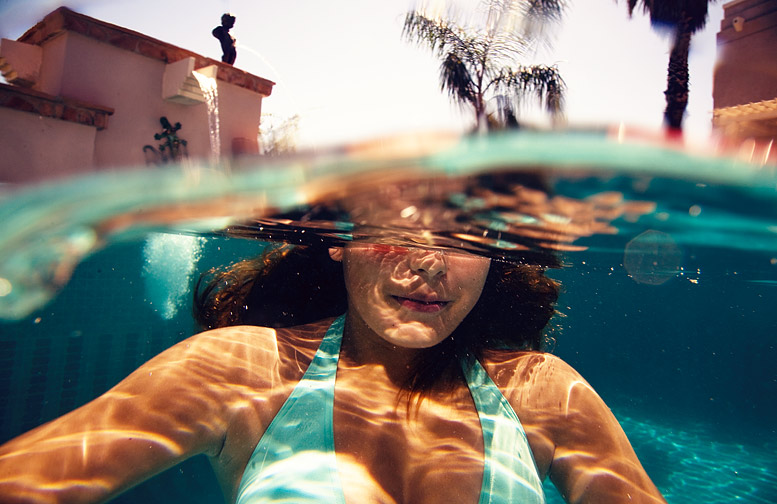 HOLLYWOOD —I rarely meet people that I truly connect with. The few times I have… I secretly think my parents are sending angels to me. I know it sounds crazy but how else would they know exactly what to say or do to make me feel a connection with them?

My dad was the only person that knew how to calm me. When I was stressed, it took but only 5 minutes of his presence to make me feel everything was going to be okay.

My overachiever personality left few hours of free time and never a dull moment. I always pushed to be a better “me.” I always took up challenges to prove myself, constantly striving to be some perfect person, never making it past average. I wanted my parents to be proud of me. Sadly, my unrelenting passion for perfection existed because they never told me they were already proud, until the very end.

So I met someone new…perhaps another angel? He’s called Paul.

Paul is like my dad in almost every way. An immigrant who came to America with ambition in his eyes and the energy and talent to achieve the American Dream. Paul is strong, successful, brilliant, calm and genuine. His sophisticated arrogance embraces his charm. He has a subtle transparency of honesty with no hidden agenda.

He could care less about offending or taking advantage of me, nor is he afraid of me, as most seem to be. He has this way of seeing right through my rubbish, knowing what I’m going to say before I say it. He doesn’t care if it will upset me. He is who he is, nothing fake about him.

Every time I see Paul, I feel a stronger connection, yet cautiously expect him to burst the bubble at any moment. At the beginning of our time together, I carry whatever panic the world tosses me…. but I leave with a happy “I can do it, everything is going to be okay” feeling I once had. He empowers me. It feels like I just spent time with my dad.

Being around Paul not only calms me but makes me feel safe, something I rarely feel any more.

To make him more amazing, he learned ASL (American Sign Language) on his own. In one month, he was fluent enough to converse without pen and paper. His signing is beautiful and accurate like I’ve never seen in a new signer, utterly unbelievable! Now I am completely comfortable and “at home” in his presence until….

He wants me to speak.

I guess it’s only fair. He learned my language, now I learn his. But it’s not so easy. I can’t speak. I’m too shy. I can’t hear myself and don’t know how god-awful I sound. The mere thought of using my voice makes me want to faint. It takes me to an ugly place I never want to go.

I just left the spot where the love of my life was happy that I didn’t speak. He used to say, “girls talk too much anyhow… so it is refreshing to hear silence.” Now someone wants me to talk?

So Paul goes on and on and on, making all these reasons why I can and should speak. When that doesn’t work, he boasts about my friend, who is silent like me.

Okay, he’s putting me in a competition now. He tells me he won’t force me.

But I can sum up everything he threw at me in one word: coercion

Then finally, I try.

The look on his face was sheer excitement. He’s so happy to hear me say, “off.”

He would lean in to listen carefully for each word and was so excited to hear anything. He says he hears me clearly although I know it’s just a whisper. I still cant use my voice. He’s so happy, so I’m so happy.

Then I think, “Wow, I can speak well after all. Why am I still mute?”

My ego is so inflated, I’m near ready to belt out Whitney Houston’s Greatest Love of All.

He’s trying hard to meet me halfway. The least I can do is speak with a full voice. And so I search for all I have within me to speak.

When that doesn’t work, I reach out to professionals. I search deeper. It’s like I’m 10 years old again wanting to impress my dad at the national spelling bee competition. It’s down to me and three kids, I’m the youngest, trying so hard to spell out words beyond my ability.

I really want to do this. Maybe it’s just a “thank you” for giving me a place that feels safe or for giving me hope to carry on. In the wee months that I have known Paul, he effortlessly comforts me without knowing, grounds me, encourages me.

He has no idea he’s the only one in my life that possesses this magic to make me feel like “everything is going to be okay.”

I’d never dream of telling him, wouldn’t want him to have that much power over me.

I flip-flop between being scared, excited, anxious, competitive, inadequate, miffed, annoyed, insulted, offended, ashamed, betrayed, feelings of wanting to disappear and run away.

Who is he… just a person passing through my life?

Why do I feel I owe it to please him?

Why do people always try to “fix” me?

Is this part of my evil Lebanese curse that I must submit to every demand of male authority?

Then I think I should get all politically correct on him and say “Why the heck are you expecting a deaf person to talk? Don’t you know this is completely unacceptable?” I’m sure the deaf community would have a national protest march with this one.

Then on the other hand, I think he cares. He wants me to break my silence because he knows that speaking is more acceptable in this world than silence.

But really, how can he care after knowing me just a few months?

Yet I know every day would be more fulfilling if I could only find my voice.

Just as I finish my internal argument over to speak or not to speak, I become more comfortable and try more words. I catch a mere glimpse of him listening with this expression of agony and disappointment on his face. Instead of leaning in to hear me, he backs away as if my whispers were the sound of nails on a chalkboard, as if I had some type of mental retardation. My mere speech is an embarrassment to him.

Now that my inhibitions have dissipated, I’m trying to speak words instead of sign and he doesn’t want to hear it. He’d rather I fingerspell the word.

I’m trying harder but the more I try, the less he listens.

Today, he even went so far as to say, “You talk too much”. Wow…I haven’t heard that one in forever.

When I confronted him with his obvious dissatisfaction, he denied it. He tells me how it’s been 4 years since I spoke and therefore “need practice”.

What is that supposed to mean, that I suck?

I guess I can’t blame him. When I was silent, I sounded great. But then it became clearer he realized my speech isn’t going to happen in his know-it-all fix-it world.

I feel like a complete disastrous failure. I couldn’t do it.

I feel utter disappointment, sadness. I let my wall down to a very scary insecurity. I tried and I failed.

So now he knows my secret… I’m terribly flawed.

Contrary to most people, who think I have a perfect voice and choose not to use it, he doesn’t want to hear it anymore. I feel completely exposed, naked, judged, and rejected. I’m gutted. I’m suddenly reduced to a disabled unspeakable mute.

So as I bounce between my inner child of wanting to succeed and “prove I can do it”…. to this empty feeling of failure… defeat, I’ve ultimately decided…I’m never going to speak again.