UNITED STATES−President Donald Trump filed a libel suit against The New York Times for publishing inaccurate news stories about the Commander in Chief.

According to the lawsuit, the NYT is accused of “knowingly publishing false defamatory statements of and concerning, plaintiff, Donald J. Trump for President Inc. (The “campaign”) claiming it had an “overarching deal” with “Vladamir Putin’s ogilarchy” to “help in the campaign of Hillary Clinton,” in exchange for “a new pro-Russian foreign policy starting with the Obama administration’s burdensome economic sanctions.” 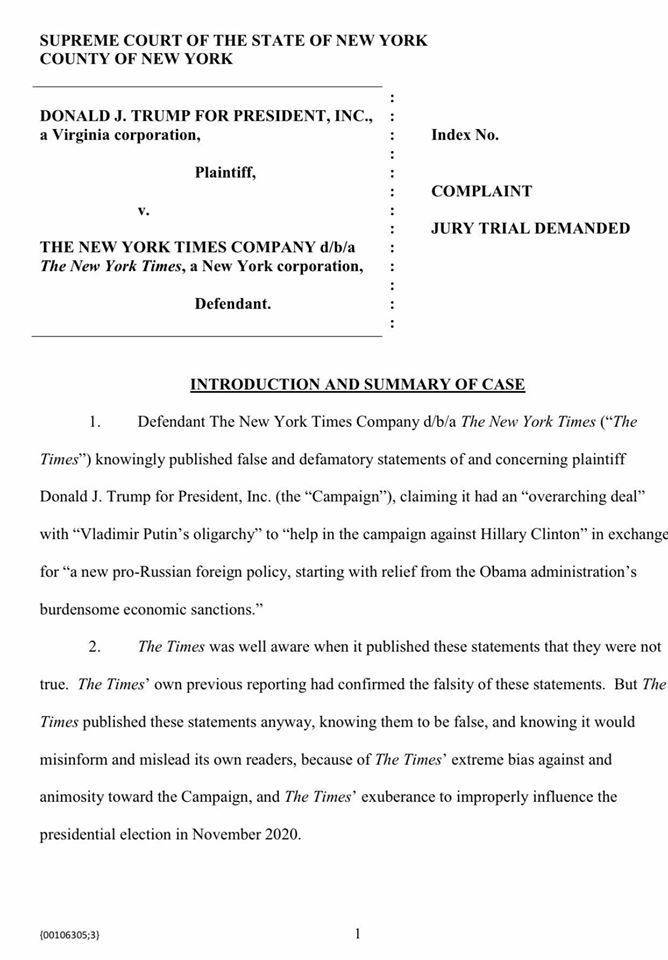 According to an article in the NYT on February 26, which appears to be in defense against the suit filed, the Op-Ed or opinion piece, “falsely asserted a ‘quid pro quo’ between Russian officials and Mr. Trump’s 2016 campaign.” 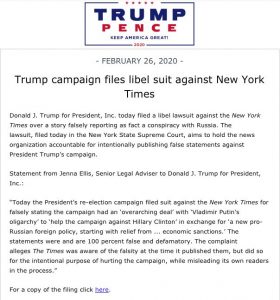 In a statement from Jenna Ellis, Senior Legal Advisor to Donald J. Trump for President Inc. said that “the lawsuit was filed today in the New York State Supreme Court aims to hold the news organization accountable for intentionally publishing false statements against President Trump’s campaign.”

“The statement were and are 100 percent false and defamatory. The complaint alleges The Times was aware of the falsity at the time it published them, but did so for the intentional purpose of hurting the campaign, while misleading its own readers in the process,” Ellis added.

President Trump called out the NYT on another occasion when the publication wrote an article titled, “With Time Running Short, Patriots Unlikely To Make White House Visit.” The Super Bowl champs visited The White House and took a picture with the POTUS.