UNITED STATES—President Donald Trump held a press conference in the Rose Garden on Wednesday, May 22, after cutting a meeting with Congress short that was intended discuss infrastructure.

According to reports, President Trump indicated in a letter to both Speaker of the House Nancy Pelosi (D-CA) and Chuck Schumer (Sen-NY) that no agreement on infrastructure could be made until Congress moved to approve the trade agreement between the U.S., Mexico and Canada (USMCA). Trump announced on the White House website that the meeting was planned for months, but Tuesday night he got word that the Democrats planned to discuss, “the I word,” which referenced impeachment. 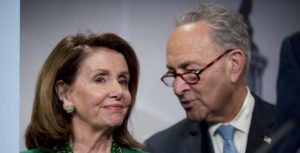 Pelosi reportedly began with accusations that President Trump was involved in “a cover-up” stating that the President may be guilty of an “impeachable offense.”

Trump indicated that he wanted to have a meeting on infrastructure, but reportedly
stopped the meeting after three minutes of accusations from Pelosi and Schumer. He explained that they cannot go down two tracks at the same time and they would not be discussing infrastructure until all of the phony investigations are over, and before he left said, “I don’t do cover-ups.”

President Trump stated in YouTube footage that there have been 2,500 subpoenas, White House counsel spoke for 30 hours, 19 lawyers, 40 FBI agents and nearly 500 search warrants. After two years and $35-$40 million, no collusion, no obstruction, no nothing.

“Congress has a clear urgent duty to uncover the truth for the American people, a duty we will not abandon in the face of @realdonaldtrump’s unprecedented cover-up. This is about patriotism, not politics,” said Pelosi in a tweet.

“It’s so sad that Chuck Schumer and Nancy Pelosi will never be able to understand the great promise of our country. They can continue to Witch hunt which has already cost $40M and has been a tremendous waste of time and energy for everyone in America or get back to work,” said President Trump in a tweet.