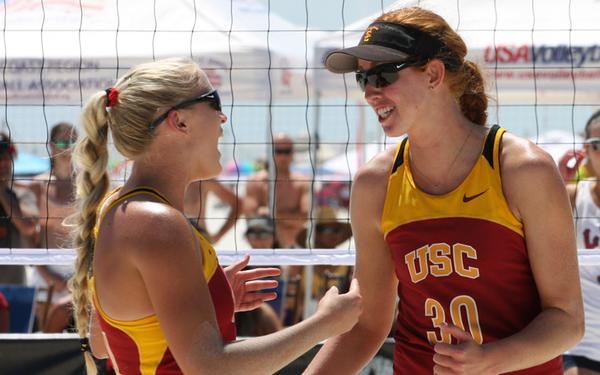 UNITED STATES—According to the rankings, USC All-Americans Sara Hughes and Kelly Claes were not supposed to win their second NORCECA beach qualifier of the season.

The duo defeated top-seeded Kimberly DiCello and Kendra Van Zwieten, 21-13, 21-18, in the final in Hermosa Beach, California on July 29 to capture their second tournament championship in as many tries.

The win qualifies Hughes/Claes for 3 NORCECA Beach Volleyball Circuit events in September (in Florida from September 9-13, in the Dominican Republic from September 16-21 and in Puerto Rico from September 23-28). They have also been chosen to be one of the USA’s entrants in the upcoming FIVB Long Beach Grand Slam from August 18-23.

Both heading into their junior seasons at USC, the pair is young and haven’t played together very long, but the duo is talented and has racked up plenty of wins together already in just a short time.

They won their first NORCECA qualifier in Hermosa last month, qualifying them for the NORCECA Beach Volleyball Circuit events from August 5-10 in Canada, August 11-17 in the Dominican Republic and August 26-31 in Cuba.

They are also coming off a third place finish in the AVP New York City Open on July 19. They are also expected to compete in the AVP Manhattan Beach Open from August 14-16.

They teamed up to win the bronze medal at the U19 World Championships in 2013. They won another bronze at the U21 Worlds last year.

Hughes, a former Mater Dei High standout, first made a name for herself after becoming the first high school player to declare she would play sand volleyball exclusively in college. The sport has only been a collegiate sport for four seasons. The 5-foot-10, outgoing blonde has been playing the sport for years.

Claes, a 6-foot-2, red-headed introvert, is a converted indoor volleyball player who was asked by Hughes to pair up with her shortly before the two competed in the U19 World Championships for Team USA. The former El Dorado stud planned to continue her indoor career at Long Beach State, but her success with Hughes was convincing enough to alter her college plans.

Together, the strikingly different pair is a perfect match and shares an intensity in the sand that allows them to be extremely competitive and ultimately, very successful, at such a young age.

Their goal for the future?

“Kelly and I both want to go to the Olympics (2020 Summer Olympics in Tokyo),” Hughes said. “It’s just finding that path together and taking it there.”