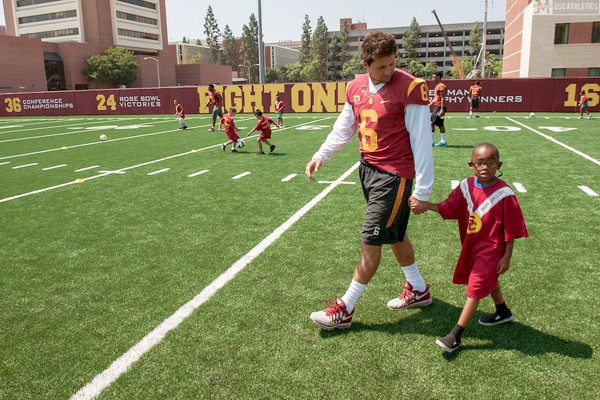 LOS ANGELES—The University of Southern California is being a great host for this year’s Special Olympic World Games taking place throughout the city of Los Angeles.

On July 29, the student-athletes of Troy decided it was time for them to make their own unique mark on the special event.

USC athletes welcomed over 100 children and chaperones from the Los Angeles Special Needs Network to campus for the first-ever Trojan Games and the theme of the day was pretty simple—to have fun.

“It was awesome to get to spend time with those kids,” said senior quarterback, Cody Kessler. “I spent most of my day with these twin boys, Chuma and Chooka, and had a great time playing football and soccer and just giving them a special day. I know they had fun and I can tell that my teammates did too.”

Kessler, a Heisman Trophy and All-American candidate this season, was joined by over 50 student-athletes from five different sports to host the historic event, a day where sports bridged the gap between two very different worlds.

Trojan athletes from the football, women’s volleyball, women’s soccer, women’s track and women’s basketball team paired up with “buddies” for the day, all young special needs kids from Los Angeles with their own unique story and hardship that enjoyed every second of their intimate playtime with some of the world’s best athletes.

“It’s something we don’t get to do everyday,” said Kessler. “Its kind of a different version of us. We’re having fun with the game again like when we were kids just playing on the playground.”

The participants were all decked out in cardinal t-shirts, gold medals and huge smiles throughout the day enjoying an event designed to inspire a new generation of special athletes.

The day began on campus at Howard Jones field as the USC athletes selected a couple young teammates to spend the day with. Then, the pairs rotated through four stations, throwing the football with Cody Kessler and JuJu Smith, scoring goals with Dominique Randle, practicing yoga with Brianna Barrett and learning about nutrition with Courtney Jaco.

The entire group ate lunch together and then stopped by USC’s Loker Stadium to catch an afternoon of track and field events at the World Games live and in-person.

By the end, everyone involved was exhausted and inspired.