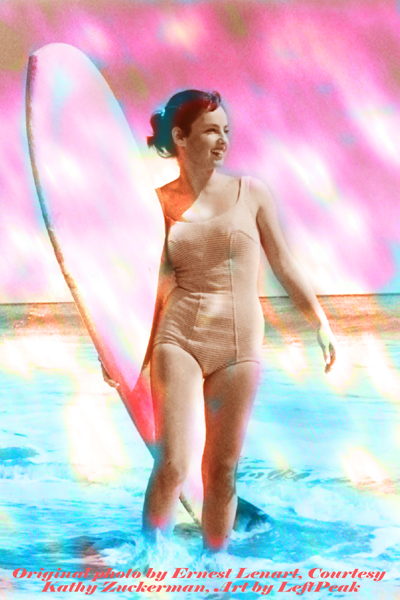 BRENTWOOD—Recently I traveled as a guest to the Iowa Film Festival. When we stepped out of the airport all eyes were on one of my traveling companions, Ms. Kathy Kohner Zuckerman. On that day the local Clear Lake, Iowa, newspaper had a front page story on Kathy, who is the legend behind “Gidget,” a character that helped cement both Sandra Dee and Sally Field as major stars in Hollywood films and on television. Kathy is a very modest and unassuming legend who gives full credit to her late father, novelist Frederick Kohner, whose brothers were famous Hollywood agents, for her stardom today. Frederick Kohner took his daughter’s diary and wrote a novel about her writings, which is currently in its 13th printing. The book titled “Gidget: The Little Girl with Big Ideas” was a huge hit at this year’s Iowa festival, and is also currently available on Amazon and in bookstores throughout the nation.

Once you spend time with Kathy, you soon realize why her story became world famous. “When I was a young woman, I thought it was silly. I attended Oregon State University, and the film came out in 1959 starring Sandra Dee. I realized she and I both graduated from University High School in Los Angeles. I don’t think we realized who the other person was at the time. I remember in college thinking to myself, why is this such a popular book and movie?” said Kathy. Perhaps it was the dream of millions of young girls and guys all across America who thought living on the beach in Malibu was the epitome of the Hollywood dream? At the time, Kohner was more interested in catching the eye of a guy named Bill by surfing than surfing itself. “Tommy, I was the only girl at University High who surfed. I was considered a maverick at the time. But I was interested in Bill at the time,” said Kohner.

Kohner is ecstatic that the documentary, which features her and Oscar-winning actress Sally Field, is making its Hollywood debut at the Egyptian Theatre during this year’s “Feel Good Film Festival.” Kathy responded, “What a treat. It was seen by most of my family at the Newport Beach Film Festival, but this is really exciting and many are coming to Hollywood for the premiere. I’ve never been to the Egyptian before, but it seems like an excellent venue for the documentary to be shown. It’s all because of our producer Brian [Gillogly], whom you met at the Iowa Festival. He’s wonderful Tommy. He’s taken such great care of me, and I don’t know what I’d do without him on this project. He managed to get Sally Field to become a part of this and it means so much.”

When asked if she was ever interested in acting herself. Kohner laughed and said, “No, Tommy. I was never interested in becoming an actress. I love people and enjoy the spotlight of this project. But acting was never my dream. That never entered my mind, I just want to promote my dad’s book.” Kathy’s husband Marvin Zuckerman responded, “She does enough acting around the house to keep herself busy as it is.”

Kathy and Marvin Zuckerman are class acts, who treat guests in their beautiful Brentwood home like family. Spending a weekend with her in Iowa, I can say that she is unaffected and unaware of her star appeal. Kohner had praise for our hostess of the festival, Tanna Frederick. “Isn’t she wonderful, Tommy? She’s a ball of fire and she’s dynamic. If anyone ever played my life on-screen, I’d want Tanna to play me.”