Cell phone footage captured Rebecca Parker Mankey berating, Victor, a regular customer at the Starbucks because of the hat that he was wearing.

Mankey began shouting at the man calling him a racist, saying he did not like brown people. Mankey reportedly tried to call people over, saying, “look at him, he’s a racist. The following can be found on Mankey’s Twitter page.

She bragged of the occurrence on social media admitting that the gentleman in the hat, Victor, was just enjoying his coffee. 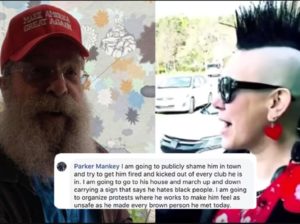 Victor, who was wearing his Kippah beneath his hat, spoke openly to reporters about the altercation, telling one reporter that the woman called him a “NAZI.”