UNITED STATES−On Friday, January 10, the Trump Administration announced that over 100 miles of the U.S. Border Wall has been completed.

Acting Secretary of Homeland Security, Chad Wolf was at the Yuma sector to mark the progress, along with Senator Martha McSally, and Acting Customs and Border Protection Commissioner, Mark Morgan, and Mayor Doug Nicholls.

Wolf spoke to the crowd before they took a tour of the new sections of border wall where new plaques were attached to commemorate the event.

“Today is a milestone that has been reached and a celebration is in order. Today, I am proud to report that the Trump administration has constructed 100 miles of border wall system along the southern border. This is a milestone achievement for the President, for the department, and more importantly four our country-including communities like Yuma,” said Wolf.

The border wall was part of a campaign promise President Trump made prior to the 2016 election. Over 62 million people voted for Donald Trump in 2016. 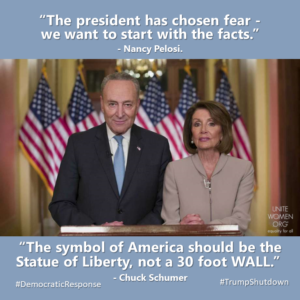 Democrats in opposition to President Trump,  including Nancy Pelosi, Chuck Schumer and others called the wall racist and fought for open borders over tighter restrictions. Democrats funded a 287 mile wall in Jordan last year.

Air Force Veteran, triple amputee, and founder of the We Build the Wall campaign, Brian Kolfage, touted another win stating on Twitter that a Federal Judge lifted a temporary restraining order (TRO).

“We can build in the floodplain. This will change the game,” Kolfage wrote. “We will save Texas.”

The We Build the Wall campaign, has been building sections of the approved border wall with private funds on donated land.