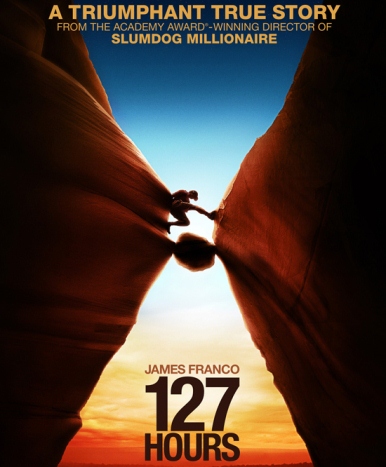 HOLLYWOOD—With the release of “127 Hours,” the Oscar race has officially kicked off. James Franco is absolutely astonishing in the role of Aron Ralston, the young man who courageously survived a boulder falling on his arm in a canyon near Moab, Utah. The harrowing experience would have crushed the psyche and emotional wellness of most people; however, Ralston proved that the desire to live is a lot stronger than most people can imagine.

The storyline is described by Fox Searchlight as, “Mountain climber Aron Ralston’s remarkable adventure to save himself. Over the next five days Ralston examines his life and survives the elements to finally discover he has the courage and the wherewithal to extricate himself by any means necessary, scale a 65 foot wall and hike over eight miles before he is finally rescued. Throughout his journey, Ralston recalls friends, lovers, family and the two hikers he met before his accident. Will they be the last two people he ever had the chance to meet?”

Everyone has asked me if this film was really as graphic as the trailer insists. It is. The scene in which Franco as Ralston amputates his own arm was much more revealing and sickening than I could have imagined. Amber Tamblyn as Megan and Treat Williams as Aron’s father also deliver very strong performances and the fear, which both actors are able to convey, is chilling.

Kate Burton as Aron’s mom seems to become the heart of the story. Burton is very warm and engaging in a role that is obviously supporting, but she makes the most of it. Director Danny Boyle triumphs in this film, the best thing he does is that he moves the story along quickly and energetically from the beginning. When the film stalls, it’s at the appropriate time for viewers to grasp the gravity of the situation and watch Franco’s supreme performance as he engages the audience in such great form. The film is not for the faint of heart. It may be far too graphic for people who are squeamish around blood.

“127 Hours” receives Five of Five Stars from this reviewer. The movie opens on Friday, November 5, nationwide.

Suspects Arrested For Looting And Burglary