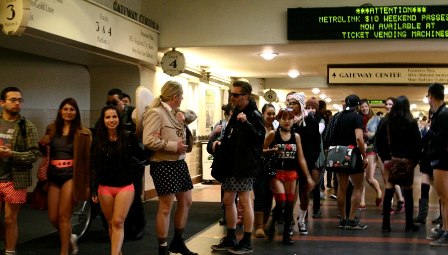 BRENTWOOD—On Sunday, January 12 people will fill up the LA Metro System for the 6th Annual No Pants Metro Ride. The event is led by Improv Everywhere, where Angelenos will show off their undies. Improv Everywhere self-identifies as a New York City-based prank collective igniting a bit of public joviality to Los Angeles and cities around the world.

Improv Everywhere “causes scenes of chaos and joy in public places” says Improveverywhere.com. The project began with a group of guys being silly which became a global phenomenon. Created in 2001 by Charlie Todd, Improv Everywhere has conducted more than 100 missions each involving tens of thousands of people.

The task is to wear winter apparel, scarf, hats, gloves, coats, shoes without pants and ride the metro without laughing or giving away any sign of absurdity. All participants are expected to pay the fare to ride the Metro System. The event takes place between 1 p.m. and 3 p.m. The public can visit their Facebook page for additional information.