UNITED STATES—On May 13, Abbott, the manufacturing company that makes Similac baby formula, provided an update on the global formula shortage noting they are working to address the “483 Observances” at the Sturgis, Michigan plant so they may reopen.

“We could restart our Sturgis, Michigan site within two weeks,” Abbott announced.

On Wednesday, May 18, President Joe Biden signed a memorandum on the delegation of authority under the Defense Production Act to ensure an adequate supply of infant formula.

On February 17, the Food and Drug Administration (FDA) announced a recall of powdered baby formula produced by Abbott.

“We air-shipped millions of cans of infant formula powder into the U.S. from our FDA-regulated facility in Cootehill, Ireland,” the FDA stated in a press release.

The company is working with their Ohio plant to increase production at their other plants to meet the supply-demand.

Abbott is initiating a proactive, voluntary recall of powder formulas, including Similac, Alimentum and EleCare manufactured in Michigan, one of the company’s manufacturing facilities. The recall does not include any metabolic deficiency nutrition formulas. Abbott voluntarily recalled these products after four consumer complaints related to Cronobacter sakazakii or Salmonella Newport, was found in infants who had consumed powder infant formula manufactured in this facility. 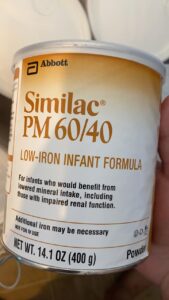 On February 28, more Similac was recalled after a reported case of Salmonella Newport. An infant was reported to have consumed Similac PM 60/40 prompting the voluntary recall.

The Abbott company closed the manufacturing plant in Sturgis after four infants were infected.  Two infants infected with the bacteria died.

To find out if a product is included in the recall, visit similacrecall.com.