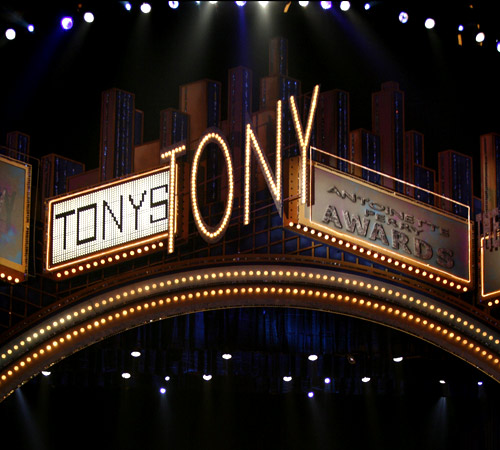 This was an exciting theatrical homecoming, handsomely chaired by Jomarie Ward and John Holly, who also beautifully directed the show. So many “Broadway Babies” are now residents of California and Hollywood theater folk saluted Broadway in grand style.

Starting with a star studded red carpet, we sipped, shopped and schmoozed at the pre-dinner silent auction.

Seating for dinner is a cinch in the cozy welcoming main room. There was not a bad seat in the house”¦ thanks to the placement of many super-sized video screens for the live feed broadcast from New York.

Our Hollywood audience felt totally included in the “Great White Way” proceedings. In fact, we had more fun, as commercial breaks were filled with the guest stars of the evening, and they were many! The video tributes were masterfully interpolated.

Producers/writers Mark Cherry and David Rambo secured theatrical phenomenon Tommy Tune as host of the event. Film diva Annette Bening was a most delightful speaker/presenter of the prestigious Julie Harris Award to the chairman of The Actors Fund, Brian Stokes Mitchell. (Annette and Brian went to high school together in San Diego.) This brilliant performer/ leading man has thrilled audiences in countless shows on Broadway and internationally. He closed our show with a loving speech of appreciation that sent us off glowing, knowing we had contributed to actors taking care of their own.

We went home and again watched the delayed N.Y. broadcast… and you know what? It was much more thrilling to be a part of the West Coast Actors Fund Tony party! Bravo to The Actors Fund!!