UNITED STATES—I believe there is a man-made version of ADHD and after observing many cases of bad parenting in public and behind closed doors, I know there are more than just a few cases.

There are despicable people, living the kind of lifestyle that no one does anything about until it’s too late and we see crime photos. People take care of animals better than some people care for children. Examples: One. Two. Three. Four. Five. Six. Seven. Eight. Nine. Ten.

Am I saying all children with ADHD have horrible parents? NO!

People are adamant that parenting is NOT the cause, but I dispute it is not sometimes the cause and offer two separate incidents as proof.

When my twins were in first grade they were a hyperactive mess. Teachers forced me to have meetings, saying my children were so disruptive I HAD to put them on ADHD medicine and sleeping pills.

The pharmacist said she’d never seen that sleeping medicine prescribed for children. I told her to keep it and made a deal with the school to work hard at correcting their behavior. If I didn’t get them “under control” by the beginning of the following school year I would concede and give them meds.

Halfway through the summer I was very overwhelmed. My twins were NOT angelic.

As a matter of fact, not too long ago they came to me reminiscing about when they were in third grade and put signs in the window that said “HELP US” – making people honk.

I always wondered why so many people honked at night. They apologize for all the times I ran upstairs to check on them and never caught them. I used to wait upstairs quietly until they went to sleep because if I didn’t, all hell broke loose.

Then, when they were in daycare I was called to retrieve one, because she stood on her cot and announced to the children, “these aren’t your mothers, you don’t have to listen to them!” She rallied the other children so none would take a nap.

Luckily for me I met a social worker who would become a friend, and when she found out the trouble I was having she told me that she was going to be truthful…

She said that my children had ABSOLUTELY no respect for me.

Too many threats about consequences, starting sentences with “if you don’t stop” and never following through. Giving in when they were not being good, just to get them to hush or stop throwing things at one another. We would walk to the store and it was like trying to hold back little birds that just kept trying to run and fly.

I made the mistake of laughing when they acted up, they WERE adorable after all.

Pat gave me a lesson that day, on how to command their attention by using a FIRM voice instead of a little pipsqueak loving tone. I learned to channel my inner MAN voice, being careful about making threats I wouldn’t or couldn’t keep. I also used consistent positive reinforcement with words.

When they would start getting out of line at the dinner table I would repeat certain things, like “you are getting so good at sitting still, if we keep practicing you will do well at school!” They went back to school with an amazing change in attitudes and behavior!

Coincidentally, the people I talk about next were very excited when they heard my twins were diagnosed with ADHD, telling me I could apply for Social Security (SSD) now. I know this is going to sound harsh but they were so excited for me, that it motivated me even more to “cure” them of the disability called ADHD.

2. The boy who listened.

One time I had neighbors that were some of the worst you can imagine. Throwing raw chicken over the fence to the dog bad. They would have never asked me to babysit, but the mother was in labor and there was no one to watch the other children.

They had a son around 12 years old who they made excuses for, saying he was being medicated for ADHD. He got away with outrageous behavior as a result. As soon as they were in my house he started jumping on furniture.

I took him aside and put on my “father” voice, pointed at him and frowned, “I know you get away with that at home but over here you get a time out.”

It worked. He was a perfect angel. He knew from observing my family: if I said you were getting a time out, I meant business.

Parenting styles can negatively affect a child in such life-altering ways, it’s irresponsible to believe that it is not a cause and/or major contributor to the development of several child disabilities. Maternal parenting can predict ADHD (2009) and others say parenting is a variable, not causation.

Dr. Nicole Brown’s research on childhood trauma being misdiagnosed as ADHD is interesting. Here’s a side by side comparison of signs and symptoms of TRAUMA vs ADHD. 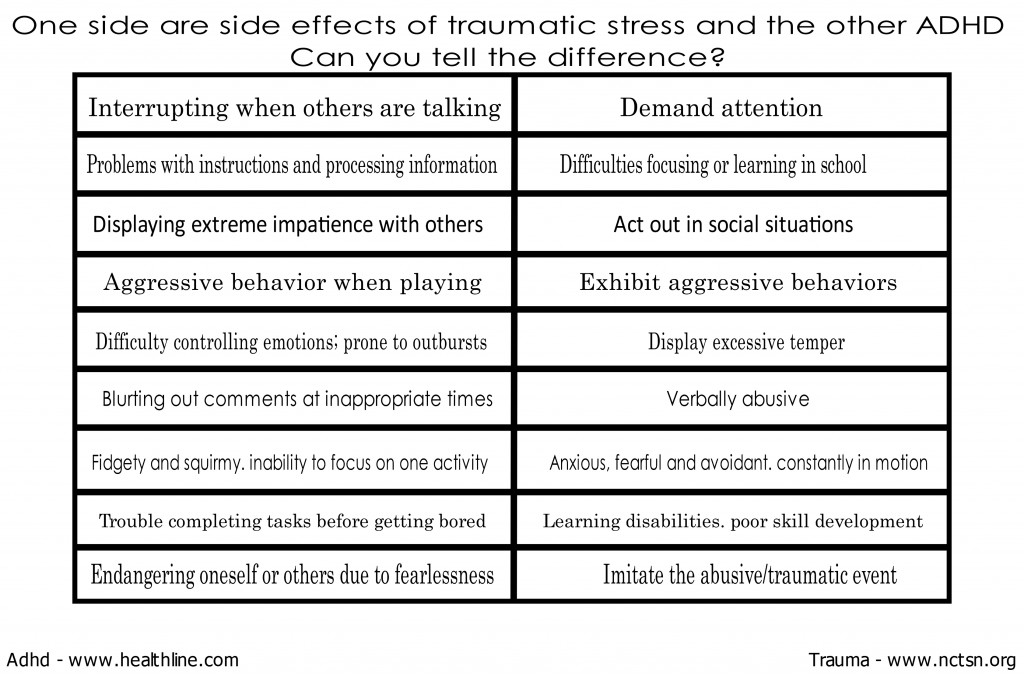 This sleep deprivation chart was created by a physician that believes ADHD is often misdiagnosed.

With so many “shared” disorders and idiopathic diseases, like shared psychotic disorder/ folie a deux, secondary PTSD, and Stockholm syndrome, we must start considering parenting as a main cause of ADHD and every other disorder that effects behavior.