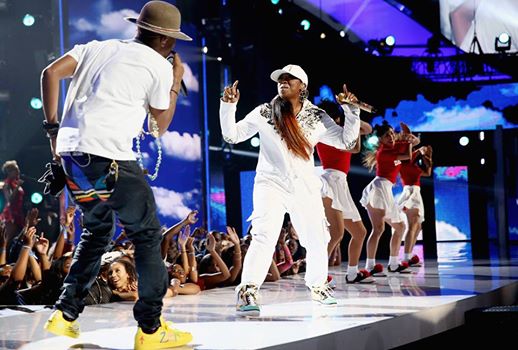 LOS ANGELES—The biggest event in black entertainment took place on Sunday, June 29 as the 2014 BET Awards was held. The ceremony highlighted the best in music for the year. Beyonce took home three awards including Best Female R&B Artist and Best Collaboration for “Drunk in Love,” while Pharrell Williams proved that 2014 is his year to shine.

The R&B/pop crooner took home two awards including Male R&B Artist and Video of the Year for his universal hit “Happy.” Speaking of Williams he opened the show singing his hit “Bae,” before he stunned the audience with the arrival of rapper Missy Elliott who has been MIA for some time. It was quite the treat to see the rapper back in her glory as she sung her hit “Pass That Dutch.”

The festivities were hosted by comedian Chris Rock, who took a moment to warm up to the audience. Some of his jokes worked in his favor, others not so much. I will acknowledge the discussion of the Solange Knowles and Jay-Z fight was risqué, but considering neither Jay-Z nor Beyonce was in attendance to the show, it was ok. The ceremony wasted no time handing out trophies as Best New Artist went to an emotional August Alsina.  The emotions continued to run high as Tamela Mann took the prize for Best Gospel artist. There were tons of performances at the ceremony, but I must admit nothing that left me reeling or wanting to talk about the next day. Rapper Lil’ Wayne, Nicki Minaj, Jennifer Hudson, Chris Brown, Robin Thicke, Usher, August Alsina, Lionel Richie, T.I. and Iggy Azalea all took the stage during the ceremony.

Brown had plenty of energy during his set, which made his performance one of the highlights. The tribute to Lifetime Achievement recipient Lionel Richie was a memorable moment, where the icon got plenty of love from John Legend, Leidisi and Yolanda Adams. Adams shut the house down with her rendition of “Jesus is Love.” Man if that lady ever crossed into mainstream pop music or R&B half of the ladies in the mix would not be able to compete at all.

J-Hud might have had a strong performance, but the audio went out during her opening act, which made it virtually impossible to gauge just exactly how strong her performance truly was. Midway through the ceremony, Rock attempted to counter comedienne Ellen DeGeneres bit at the Oscars by passing out food. Instead of pizza, he passed out Roscoe’s chicken and waffles to Paris Hilton, Snoop Dogg and others. He ensured that a salad was handed to rapper Rick Ross.

One of my favorite songs of the summer, “Fancy” got the energy going for the crowd as Iggy Azalea hit the stage. I see big things for the rapper coming in 2014.

Best Male Hip-Hop Artist went to Drake, while Nicki Minaj picked up her fifth trophy in the category for Best Female Hip-Hop Artist.  Actress Lupita Nyong’o was acknowledged in the Best Actress category. Best Group was awarded to Young Money, which saw rapper Lil’ Wayne received some well-deserved acknowledgement from his mentor Nicki Minaj amongst others. The Coca Cola Viewer’s Choice award went to a very gracious August Alsina.

The ceremony was closed by super couple Jay-Z and Beyonce who performed their hit “Partition” live in concert. I kind of knew the couple would be in attendance at the ceremony considering they just launched their “On the Run Tour.” It was interesting, but not something to talk about the next morning. So the 2014 Bet Awards are in the record books, some shined many didn’t. Perhaps the key to making the show exciting again, is finding the right host. I must admit no one has delivered the way comedienne Monique did in 2003 and 2004 (which was one of the best ever).