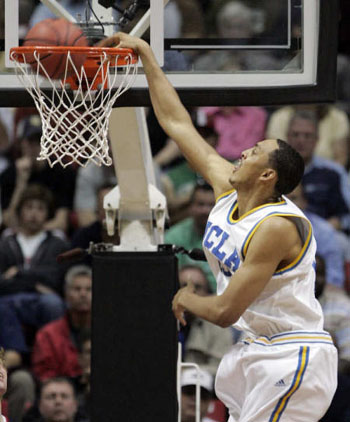 WESTWOOD—Like I mentioned last week, the month of November is a time where most college football teams make or break their seasons. Championship match-ups are decided and the possibility of going to a bowl game or staying home can come down to one play.

This is very dramatic and exciting for people who love football, but what if that’s not your thing? What about those people who love seeing players fly through the air for a jaw-dropping dunk or finish a game with a crowd-silencing jump shot to win the game?

Well for those people who could care less about the physicality of football and prefer a little finesse, you’re in luck. The month of November also brings the start of the college basketball season and no one loves their basketball more than UCLA Bruin fans.

Last season was unfortunately one that most Bruin enthusiasts wish could be stricken from the history books and etched out of their memory, but since current technology doesn’t permit that, the only thing left to do is move forward. Since last season, the Bruins have hit the weight room and the court hard in preparation for the upcoming season. Put that together with the death of legendary basketball coach John Wooden and the Bruins have the inspiration and the drive to make 2010-11 a special year for UCLA basketball.

So far hard work and a nice recruiting class has gotten the Men’s Basketball team off to a 5-0 start leading up to their biggest contest of the year against the 6th ranked Villanova Wildcats on November 24. The team is being led by sophomores Tyler Honeycutt (15.7 ppg) and Reeves Nelson (19.3 ppg), who both got a lot of experience last year and now look to carry the team back to where it was just a few years ago.

Now before all those lovers of women’s basketball start getting anxious, don’t think for a second I have forgotten about the Lady Bruins. Coach Nikki Caldwell has done an amazing job of changing the cultural for the women’s basketball program and last season Coach Caldwell enjoyed the most successful season of her young coaching career with the Bruins finishing 23rdin the final rankings and reaching the second round of the NCAA tournament.

This year the team is looking to build off the success and experience of last season so they can soon bring UCLA into the conversation when people talk about the great teams in women’s basketball.

The team opened the season as the 15th ranked team in country and have started off 3-0 to prove to everyone that they deserve it. Like their male counterparts, the first real test will come in their next game against the 12thranked Fighting Irish of Notre Dame.

Jasmine Dixon and Markel Walker will be the key components to victory as the Bruins march into South Bend on Novemeber 18, ready to show how much better they are than last year.

College basketball has just begun and they are not handing out the prizes or championship trophies yet, but the performances by both teams so far have given fans hope that UCLA will be poised to claim those prizes by the time the season comes to a close.

Suspension On Evictions, Rent Increases In Beverly Hills End May 31

Wiggin’ Out: Warriors A Win Away From NBA Finals