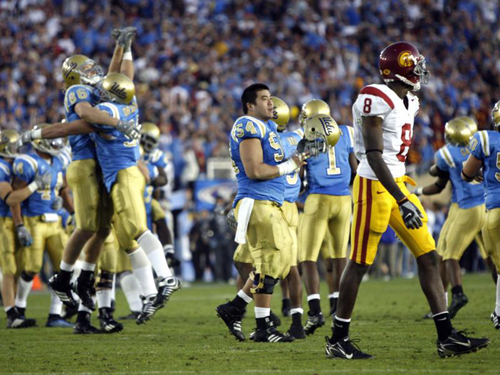 WESTWOOD—The saying goes, “The games to remember are played in November.” For college football this saying has rung true for many teams throughout the years. To people not familiar with college football it may seem like November is no more important than any other month, but they would be horribly wrong.

November is crunch time. November is the time to make a push for the national championship or keep yourself on top. November is made up of crucial games against teams in your conference that can decide the outcome of your season. November is where your team finds out if they will be playing in January, December or just sitting at home for the postseason.

The month of November means a lot of different things depending on the team, and for the UCLA football team it’s the most important month of their season.

Last season the Bruins had an October they would rather forget, but they came back strong in the month of November winning three of their last four games to secure passage to a bowl game. This season is unfortunately similar.

After another dismal October marked with blowout losses to Cal Berkeley (35-7) and Oregon (60-13), the Bruins are looking to November as a chance to turn their season around and get the seniors to a bowl game.

Unfortunately, things will not be as easy as they were last season. From top to bottom the Pac-10 is a very deep conference and to go four for four to finish off the season, the Bruins will have to play their best football to make it a reality. Their first challenge will come in the form of the Oregon St. Beavers in the Rose Bowl on November 6.

Lately the Beavers have been a pretty hot team and early on in the season played very well against two teams ranked in the top 5 (#3 TCU and #4 Boise St.), but those who think there is no hope shouldn’t worry because the Bruins don’t need hope, they need to win which is what they plan on doing for the rest of the season.

Arizona may have caused another heartbreaking defeat for UCLA in the last week of the season, but during that game the hibernating UCLA offense finally woke up against the highly touted Arizona offense. Throughout the game the Bruins were able to effectively move the ball downfield through the air for big plays. A 68-yard touchdown strike to Randall Carroll and another one on a 49-yard pass to Josh Smith by Richard Brehaut showed everyone the potential UCLA has offensively.

It may seem to some like a scenario where it’s a little too late for the Bruins to salvage the season, but the good thing is it is not.

Even with all the injuries the team has suffered, one thing that has remained consistent is effort. It didn’t mater that Oregon was up by over 40 points, the team kept playing hard every down and were determined to get some points on the board. That effort and attention to detail will allow UCLA to be successful throughout these final four games of the season. If the Bruins can somehow come together on both sides of the ball and play like they did during their three-game winning streak earlier on in the season, then the Bruins can make this year of college football one of the most memorable ones in years for UCLA fans everywhere.