WESTWOOD—Following a December collapse, the faintest pulse is gaining momentum in Westwood.

Owning more championships than any program in collegiate basketball history, the UCLA Bruins entered the new year struggling to escape the basement of the PAC-12 conference. 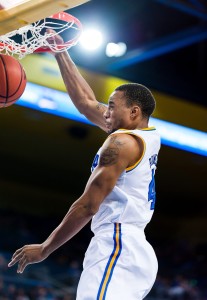 But with the calendar flipped a page forward, the Bruins can look back upon January as a month in which they rebuilt a once crumbling NCAA tournament resume. Currently sixth-place in the PAC-12, UCLA has won five of their last seven games, dominating the opponents they should beat and pulling-off a pair of upsets along the way.

Yes, the Bruins benefited from a softer portion of their schedule. Yes, their two recent losses, consecutive games against Oregon State and Oregon were by 10 points or more.

But after those games, UCLA showed resiliency in convincing victories over Utah and Colorado, avenging December losses to both teams. During this stretch, the Bruins have developed an identity behind the gritty efforts of senior guard Norman Powell, who has knifed through defenses and consistently fed the ball inside to UCLA’s big men.

“He’s a senior and he made a lot of big plays for us,” said UCLA coach Steve Alford. “As a senior when you get that kind of leadership, other guys follow.”

Having spearheaded a pair of home victories, Powell will be looked to in Thursday’s upcoming road matchup with Stanford, the team they beat in double overtime to snap their losing streak and begin their current stretch.

“We’re getting tough,” said Powell. “We’re getting gritty and we’re playing defense, doing the little things that open up our games.”

Thursdays’s tilt with Stanford will begin at 6 p.m. (PST), broadcasting live on ESPN2.