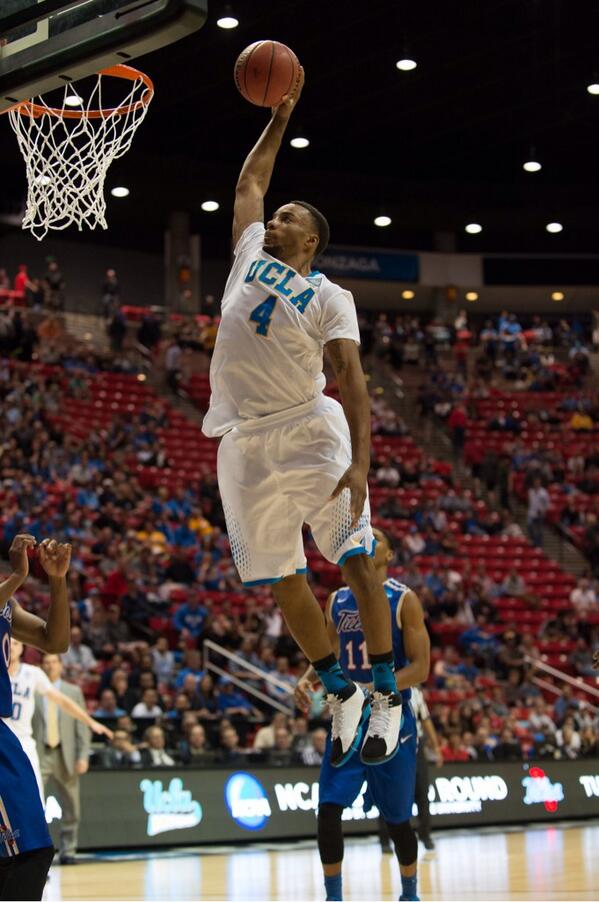 SAN DIEGO – UCLA came through on what could be considered a home game. With round two taking place two hours south of Westwood. The Bruins smashed through the University of Tulsa Hurricanes, 76-59 to advance to round three of the NCAA Tournament. Jordan Adams led the Bruins recording 21 points, eight rebounds and four assists on the night.

With the Bruins finishing a solid season not seen since 2005, there match against Tulsa started as game they would not find trouble winning. In the first two minutes, the Bruins went on an 8-3 run with most coming off turnovers and rebounds from the key. The mistakes gave UCLA a buffer to work with until the Hurricanes made a surprising march back.

Before the end of the second half, Tulsa scored to come back from a 28-21 deficit with four minutes left to even the game at 30 apiece with 100 ticks on the clock. Eventually the Bruins gained ground back to go up five at the half, with UCLA’s starting five following teammates Travis Wear and Kyle Anderson who notched 12 points combined.

The second half saw Adams on the mark shooting UCLA’s first six points helping the team to a 12-0 run in the first four minutes. The Bruins top five continued to hold the lead as they found themselves up by 10 at the midway point. Tony Parker contributed further as he scored eight points going 5-7 from the two point line. Bruins Head coach Steve Alford put in his son Bryce where the freshman guard seven points and four assists through 18 minutes. Their success was inevitably Tulsa’s downfall coming in as the 13th seed of the tournament. The Bruins won their 101st game in the school’s history hoping to bring a championship back to their school

Next on the Bruins march to the final four is Steven F. Austin who took down Virginia Commonwealth in a stunner beating the Rams by two. With the new leadership that the Bruins find comfortable, their calmness In playing a 40-minute game of basketball should help them eliminate the mid-major out of the Southland Conference.