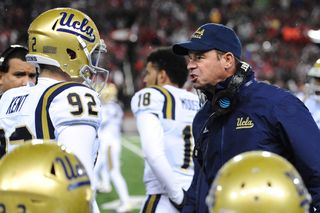 PULLMAN, WA—Every UCLA defeat this season has been devastating because all four losses were on the Bruins. Add Washington State’s 27-21 victory on Saturday, October 15 to the mix. UCLA falls to (4-3) overall and (1-3) in the PAC-12 Conference.

The Bruins were without quarterback Josh Rosen, who warmed up pre-game, but it was apparent he couldn’t play due to a shoulder injury suffered last week at Arizona State.

Enter fifth year senior Mike Fafaul. In his first career start, he went 24 of 40, with 2 TD passes. Despite pouring rain, and a non-existent running game, he fared well and found a rhythm in the second half. A balanced offense with a strong running attack is crucial for victory in the sloppy weather. The Bruins only managed to gain a pedestrian 43 yards on the ground.

It was the defense’s first time of allowing more than 24 points, although they held Heisman hopeful QB Luke Falk to 28 of 48, 261 yards and no touchdowns.

With the Bruins trailing 24-7 in the third quarter, the Bruins showed heart and mounted a spirited comeback. A four-yard TD pass to Darren Andrews brought the Bruins within six points, 21-27. But a forced fumble with 3 minutes left ended any chance of a comeback.

Now what? An outstanding defense, a solid team and a losing record. Sad times in Pasadena, with Utah looming on Saturday.  Another tough loss for the gutty little Bruins.