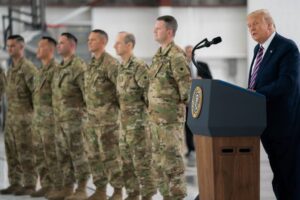 President Trump told the crowd, “The crews responded to the creek fires in the Sierra Nevada Mountains on September 5, where hundreds of campers were trapped at Mammoth Falls, continuing the mission into the early hours of September 6.”

“While they were on their way to the campground the crew received word from state and local officials and Homeland Security that it was far too dangerous to continue the mission, ‘Turn Back’ but they decided to continue anyway, knowing they might not return. They knew that the people were in great danger.”

“As the night set in,” President Trump continued, “the crews could see almost nothing through the miles of dense smoke, even using night vision goggles…, but they reached the camp. They found the stranded families. Today it’s my profound honor to award seven extraordinary soldiers with the Distinguished Flying Cross for their remarkable courage to rescue their fellow citizens.”

A military aide called the troops to attention as he and their Commander In Chief awarded the soldiers their medals.