UNITED STATES—Hector Acosta-Ojeda, a hitman for the Mexican drug cartel, was charged and convicted in Tarrant County, Texas for the murder of his roommate, Erick Zelaya whom he shot and beheaded along with his roommate’s girlfriend, Iris Chirinos that he shot as she attempted to flee the scene in 2017.

The jury deliberated for 4-5 hours before sentencing Acosta-Ojeda to death on Wednesday, November 13. 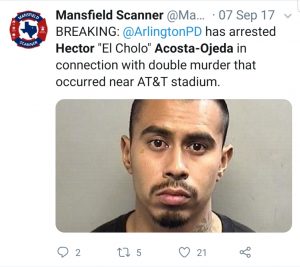 Acosta-Ojeda, who is known as, “El Cholo,” shot Zelaya and Chirinos in their sleep in their Arlington, Texas home, and buried them in a shallow grave in his backyard.

According to reports, after beheading Zelaya, Acosta-Ojeda mutilated the couple’s bodies with a machete and a two-by-four. He discarded Zelaya’s head as he left on his bicycle near AT&T Stadium accompanied by a sign promising more violence. The sign read, “La Raza Se Resreta y Falton 4,” which means “The race must be respected and four are left.”

Will Johnson of the Arlington Police Department announced via Twitter on September 7, 2017:

Lead prosecutor, Kevin Rousseau indicated that Zelaya called the murders retribution for a past drive-by shooting he believed Zelaya participated in.

Defense attorneys asked for a life sentence for the suspect citing the violence he was exposed to while growing up in Monterrey, Mexico.