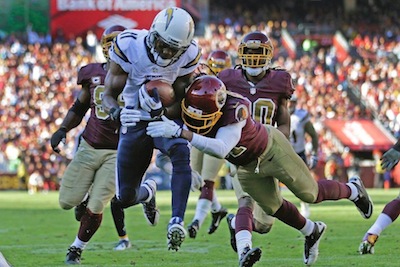 The Chargers suffered a tough loss on the road against the Washington Redskins, who managed to pull away with a 30-24 victory in overtime. San Diego is now 4-4 for the season and Washington is 3-5 as both teams enter week nine.

The Redskins won the coin toss and deferred possession to halftime. Phillip Rivers and the Chargers offense gained two first downs, but were unable to pass midfield. Special teams sent out Seyi Ajirotutu, who kicked a perfect ball that went out of bounds at the Redskins one-yard line.

Redskins quarterback Robert Griffin III, who returned to full practice on Wednesday, completed a 92-yard, 16-play drive, but was denied points by the Chargers defense when Lawrence Guy deflected a 25-yard field goal attempt by Redskins Kai Forbath. According to the Chargers website, it was the team’s first blocked field goal since 2002.

The Chargers offense was forced again to punt, and special team’s kicker Mike Scrifres repeated Ajirotutu’s excellent ball placement with Redskins starting on the one-yard line. Chargers Lawrence Guy stretched to tip another ball at the line of scrimmage, and Sean Lissemore was able to snatch the ball and score the Chargers first defensive touchdown of the season. Chargers led 7-0 at the end of the first.

The early momentum was disrupted when Rivers threw an intercepted ball intended for Vincent Brown in the beginning of the second quarter. It was the quarterback’s sixth interception of the season. On the next play, Morris of the Redskins broke through Chargers defense with a 26-yard run, and completed the drive with a 5-yard touchdown. The touchdown was the first one scored against the Chargers defense in 12 consecutive quarters, an all-time team record.

The Chargers hustled back with Andy Royal scoring a 15-yard touchdown with less than a minute to go in the second quarter. Redskins Forbath was denied his longest field goal attempt of 59 yards when Corey Liuget deflected the low skimming ball, making it the team’s second block of the game.

The Chargers loss their 14-7 halftime advantage when Washington’s Darrel Young scored a one-yard touchdown. The third ended with Chargers-Redskins tied 14-14. The start of the fourth brought an early Redskins touchdown by Young for his second one-yard touchdown of the night. The Chargers offense could not connect a returning drive, and Rivers threw his second interception of the night. Redskins kicked a 47-yard field goal and pushed ahead 24-14. Chargers responded with a 77-yard drive ending with a 16-yard touchdown pass to Keenan Allen.

With less than a minute left in the game, the Chargers were behind 24-21, but in a comfortable position of first and goal with two timeouts left. With only half a yard to go, the Chargers failed to score in three plays and were forced to send kicker Novak to tie 24-24.

The Redskins won the overtime coin toss and elected to start with possession, scoring a sudden death touchdown on their first drive and beating the Chargers 30-24.

The team attributed the loss to their failure to execute in those crucial last three plays of the game. On the team’s website, Quarterback Rivers stated, “I just think as players, in any football game that’s ever been played it’s too easy to always say what you should have called or should have ran.” He continued, “It’s too easy to say, Oh we could have run this, we could have run that, after the fact.  As players, it’s our job to execute.  We had a chance to get it in at the half-yard line and we didn’t do it.  It’s that simple.”

The Chargers return home to Qualcomm Stadium on Sunday, November 10 to play against the Denver Broncos at 1:25 p.m.