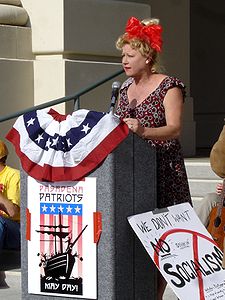 BEVERLY HILLS—On Sunday, September 26, a crowd of 200 people gathered to rally against the current administration in “Tea Party” style. Headlining the event was conservative singer and author Pat Boone who wrote a song for the occasion titled “I Am American.”

In total there were about a dozen speakers at the event, which included conservative blogger Andrew Breitbart, conservative advocate David Horowitz and former “Saturday Night Live” cast member Victoria Jackson. Also in the crowd was actress Alana Stewart, and the UCLA student organization the Bruin Republicans. The student group sold “capitalism cupcakes” beside a cardboard cut out of former president Ronald Regan.

The crowd of 200 was made up of all walks of life with actors, directors, doctors, pastors and politicians joining in on the rally in the midst of the fall heat wave. Speeches ranged in topic from the mainstream media to immigration. The day was mostly made up of speeches and musical performances in between speakers, which included Boone’s new song with lyrics that included, “I am American, my blood is red, white and blue.”

Jackson also took part in the musical interludes singing her song “There’s a Communist in the Whitehouse,” accompanied by a ukulele. The song has been much blogged about online and focuses on her views on Marxism and socialism.

Many supporters of the grassroots movement held signs, wore t-shirts and even hats criticizing President Barack Obama. One such t-shirt spelled out Obama as “One Big Ass Mistake America.”