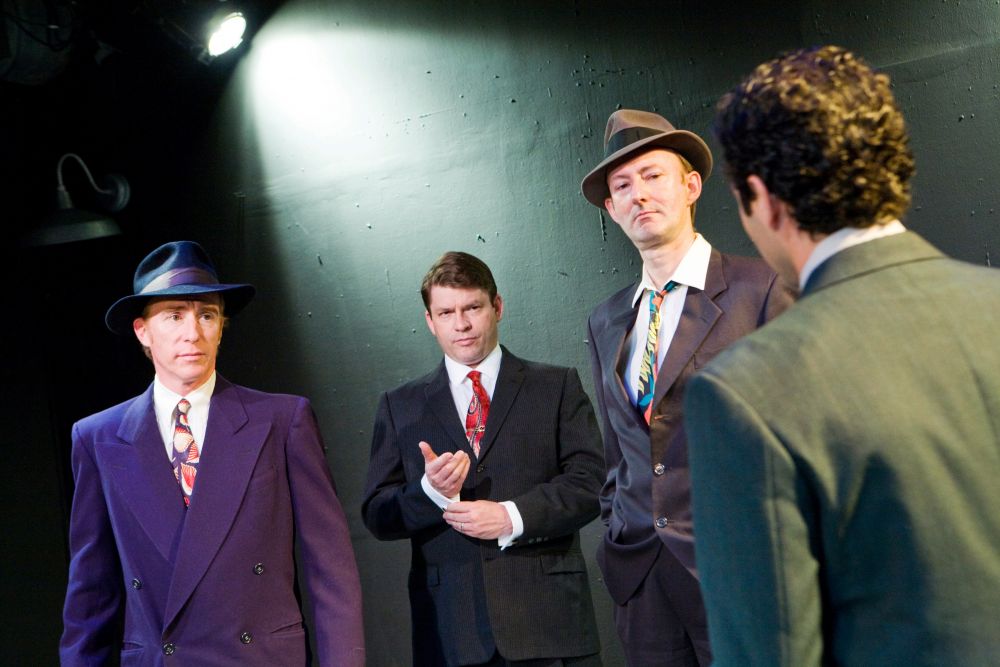 HELLO
AMERICA!â€”When I began acting growing up in
Hollywood, improv was simply another technique process enjoyed in a class. It forced an actor to think and feel or to honestly respond to whatever the situation being faced at that moment on the stage.

It was difficult but exciting because every moment pushing forward open new doors of thought and understanding.  Dan Oâ€™Connor who is a wonderful director and actor takes this conclusion and adds other layer of experimentation which makes it even easier for actors to run free at every turn.

MSJ: When you were being trained as an actor and or director what techniques were popular then?

DO: I started training in the young conservatory of A.C.T in

San Francisco when I was 9 so I received a first rate training very young.  The skills taught were about being professional and honing your craft (acting, voice, speech, movement and improvisation). I also had the good fortune to be cast in a number of A.C.T main stage shows where I was surrounded by terrific professional actors who were yet another level of theatrical education.  I joined Actor’s Equity when I was 10 so I always aware of seeing acting as a profession. I got to see how professional actors who had been in the theatre for years, went about preparing and performing a role.

After high school I went to a drama school in

London and experienced a different school of thought regarding acting.  One that was solidly based in technique.  I actually learned how to cry, how to laugh and how to correctly put a cigarette out on stage among other things.  It was very outside in.  I feel very lucky that I experienced both types of training.

MSJ: When did you discover the value of improv?

DO: I loved it as a kid because I could make things up and make people laugh.  I discovered a terrific application for it in

London as I was waiting on stage for an actress who had missed her cue.  This was during a production of the restoration comedy The Recruiting Officer.  I has to improvise in that style for a couple of minutes while they went and found her back stage.  I found it very valuable that night!  I continue to find it very important in every audition I go on and every show I direct.  Being able to think on your feet and adjust to whatever is unfolding is invaluable.

MSJ: What does it actually do for an actor? Does it help one to find the center of a character for which an actor is responsible in creating?

DO: I think actors with a sold improv training are slightly invincible.  What I mean by that is that they are able to be relaxed even when things go off the rails.  As far finding the character in scripted work goes I know as a director I can help actors find more aspects to their character by using improvisation in the rehearsal process.  This is particularly helpful when working on a play as you have more time to dig deeper.

I direct hybrid television shows which are partly scripted and partly improvised. In that format I am trying to bring the various ingredients of what the writers have put on the page with what the actors bring to it on their feet.  Being a hybrid myself hopefully means I can bring all of those aspects together in a way that is using the very best of all of the artists who contributed.

MSJ: For years improv had been utilized as another acting technique in a class or workshop. Now there are complete shows using the technique for a paying audience.  Is this because people are hungering for something new and challenging to watch?

DO: Audiences are always looking for something new to experience. We are trying [to] create something entirely different.  We are creating theatre on the spot. Our shows are plays created by actor/playwrights in real time in front of the audience.

We are creating a different type of engagement with the audience.  They are part of the show.  They give input, in the form of suggestions, and we use it to inspire and shape what we create. Because they are responsible for giving the suggestion they have more at stake.  Their idea is the spark of the evening so their relationship with us is less adversarial and more collaborative.  Many aspects of theatre strive to look like they are being created in the moment, well we actually are creating it in the moment.  It’s not parody, it’s not just going for a laugh (not that there is anything wrong with that) but it is trying to engage the audience in a much more visceral way.

MSJ: Who are some of the well known actors using improv because of the characters they create?

DO: I think most actors use improv. Improv gives you the tools to create character and tell a story. I imagine all the Mike Leigh, Christopher Guest and Judd Apatow film casts use it more than most but it is an invaluable tool for actor.  Actors are storytellers so itâ€™s pretty damn handy to know how to tell one.

MSJ: What kind of audience does improv attract?

DO: It depends on what improvisation you are seeing.  Just not like any other form of theatre/film there are many different audiences.  Impro Theatre’s audiences are a wonderful mix of old-school theatre goers and young people looking for something different as well as fans of whatever genre we are performing.  Jane Austen UnScripted attracts tons of Austen fans.  She stopped writing in 1817, but her fans can see a brand new play every night as we create something that is very like her but not written by her. We are doing the Western UnScripted in the fall and I can’t wait to see who turns up for that.

MSJ: Since there is no script involved, how much â€œdirectingâ€Â does it take to consider an improv production ready for an audience?

DO: All the directors at Impro Theatre do some very heavy lifting.   They will research the writer, the writer’s works, the period in history in which they wrote, their private life and all the themes they expressed.  The director then tries to distill for the cast by putting together rehearsal curriculum all of that in a concise manner.  Part of this process is to create improvisation exercises that drill the cast and help to give them an understanding so complete that they can go out on stage and create a play that is solely of that author without anything they actually wrote.  We don’t have any format of plan we start a show so the actors must dig deep in the genre to be able to improvise it. The director has to continue shape things during the rehearsal weeks to make sure the actors know the genre, perform it well and know how to tell a story in that style.

MSJ: How has improv affected your life and artistic career?

DO: I met my incredible wife through improv and some of my closest friends as well.  It has given me a terrifically varied and interesting career and an outlook on life that is wonderfully positive. It continues to be inspiring every day.

Dan O’Connor is the Artistic Director of Impro Theatre and co-director of Shakespeare UnScripted A completely improvised play in the style of William Shakespeare which previews March 20th at the Carrie Hamilton Theatre upstairs at the Pasadena Playhouse Opening Night March 30 and runs until May 4.