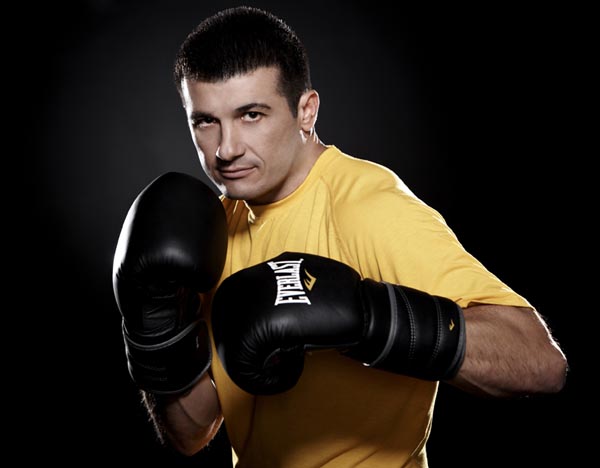 HOLLYWOOD—Just last week I entered the ring with a world champion boxer, but luckily he took pity on me and didn’t hit below the belt. Then again, as scrawny as I am, he decided we wouldn’t spar at all. Danny Musico, who has been a boxing champion, is a total gentleman. He is one of Hollywood’s rising acting stars and is sought after by Hollywood elite for physical training. “I try to be the man my father and grandfather taught me to be. They were tough men, who had big hearts and they may not have carried their feelings on their sleeve, but mine was a family filled with love and support for each other,” said Musico. The handsome star heaped high praise on all of his relatives and credits his tough but loving upbringing for making him the man he is today.

Danny was injured in the early 1990s when he was hit from behind by a cab chasing two fare-beaters. The cab driver was driving on the sidewalk in an effort to scare and also catch the pair who didn’t pay for their ride. The handsome boxer was thrown headfirst through a Plexiglas bus kiosk and into a retaining wall made of metal. His injuries would stop him from attending and participating in the 1992 Olympics. With his dreams shattered, two spinal disks ruptured, his leg almost torn from his body, Danny says, “I felt nothing from my waist down. I could not even lift up my head and see that my left leg was missing.” In almost a trance-like state, overhearing the doctors tell his family that he’d be lucky to ever walk again, Danny made a decision at that moment to put all of his teachings by his father and grandfather to work. “I knew that no matter what the doctors were saying, that I would walk again. It was not if, but when in my own mind,” said Musico.

After five months of being bedridden and in the hospital, the talented boxer was relieved to be released from the hospital and he spent the next few years getting back his health and being rehabilitated in order to prove his doctors wrong and walk again.

“I knew I couldn’t just lie there and do nothing,” said Danny. “So I called my dad and asked him to buy me a bike. He bought me a Diamondback, and within seven months of the accident, I started thinking about boxing again. I had so much love from family and friends, I didn’t have time to be bitter about the accident and the cause of my pain, I just wanted to be myself again.” What Danny Musico has become is one of Hollywood’s greatest Renaissance men. He’s accomplished so much in such a short time, but has done so with gratitude to his elders and appreciation of his friends. Rarely has a man stepped into the business he’s in and succeeded without allowing it to change their character at times. Danny is still as gracious and noble as he was as a young kid from New Jersey. He did what his parents told him and boxed with men twice his age in order to become the best champion boxer in history.

As the talented fighter kept traveling from the East Coast to Hollywood on business, he decided to make L.A. his home. “After my divorce, I decided it was time to make a go of it here in L.A. I was lucky to meet such great people, especially my manger Milt [Suchin]. I am grateful for what I have and most grateful for my parents and grandfather for making me the man I am today,” concluded Danny Musico.

Photograph is Courtesy: jsquaredphotography.com
DISCLAIMER: This article was a contribution made by an outside agency or person. The content has not been verified by Canyon News. Please exercise your due diligence prior to relying on this article for factual information. Canyon News is not responsible for the views, words, and opinions of contributors.