UNITED STATES—Pentagon officials have indicated that President Donald Trump is still the Commander-In-Chief, despite efforts from members in Congress to have him impeached before his term ends on January 20, 2020.

Officials indicated they will not allow Speaker of the House, Nancy Pelosi’s partisan efforts to interfere with their investigation.

“Mr. Trump is still the Commander in Chief; unless he is removed, the military is bound to follow his lawful orders. While military officials can refuse to carry out orders they view as illegal or slow the process by sending those orders for careful legal review, they cannot remove the President from the chain of command. That would amount to a military coup,” stated Department of Defense officials.

On January 8, Pelosi admitted that she had spoken to General Mark Miley in an attempt to undermine President Trump’s authority for the remainder of his term.

“This morning, I spoke to the Chairman of the Joint Chiefs of Staff, Mark Miley to discuss available precautions for preventing an unstable president from initiating military hostilities or accessing the launch codes and ordering a nuclear strike. The situation of the unhinged President could not be more dangerous, and we must do everything that we can to protect the American people from his unbalanced assault on our country and our democracy,” Pelosi wrote in her statement on Friday, January 8. 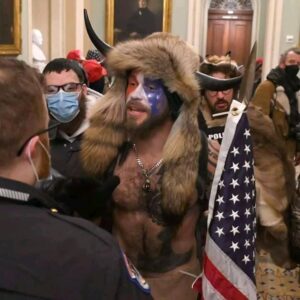 While Capitol Police, Secret Service, and the FBI are attempting to investigate and uncover who, of all of the groups [approximately 5,000 people] who were present in DC, and who was responsible for the storm and the four deaths that took place at the U.S. Capitol.

In addition to the 14-year Air Force Veteran Ashli Babbitt, from San Diego, there were  two individuals killed from Alabama, and one member of the Capitol Police who was killed.

“The FBI and Metropolitan Police Department will jointly investigate the case and the Department of Justice will spare no resources in investigating and holding accountable those responsible,” said Acting Attorney General Jeffrey Rosen.

Pelosi and Senator Chuck Schumer have blamed President Trump for the violent protests at the Capitol announcing intent to have the POTUS impeached with less than two weeks left in office.

“If the President does not leave office imminently and willingly, the Congress will proceed with our action,” Pelosi stated in her letter.

In the aftermath of attacks at the U.S. Capitol, President Trump, Vice President Mike Pence, House Minority Leader, Kevin McCarthy, and other members of Congress sent out messages via social media condemning the violence, asking for peace, and offering condolences for the lives lost.

Department of Defense Executive Secretary David S. Soldow provided the following timeline and details of the U.S. National Guard, Capitol Police, and other security put into place prior to the Trump Save America Rally and the Certification of Election results.