UNITED STATES−The Department of Homeland Security (DHS) will no longer permit New York residents to enroll in global entry and trusted traveler express lines at the airport. In a press release from February 6, Acting Secretary of Homeland Security, Chad Wolf announced that residents will no longer be eligible to apply for or renew their enrollment in certain trusted traveler programs like global entry.

“Specifically, this Act precludes U.S. Customs and Border Protection (CBP) and Immigration and Customs Enforcement (ICE) from accessing and validating pertinent information contained in New York DMV records that is operationally critical in DHS’ s efforts to keep our Nation secure. The Act also threatens to block access to other state law enforcement agencies and departments if those agencies or departments provide New York DMV records to CBP and ICE,” said Wolf.

In the past, CBP utilized records and information from DMV in several ways to promote national security and enforce federal customs and immigration laws to validated individuals  who applied for the Trusted Traveler Programs (TTP). A person’s criminal history affects their TTP status.

TTP permits expedited processing into the United States from: international destinations (under Global Entry); Canada only (under NEXUS); and Canada and Mexico only (under SENTRI). TTP allows quicker processing for commercial truck drivers entering or exiting the United States (under FAST). The CBP needed New York DMV records to establish ownership and to determine whether a used vehicle is approved for export. 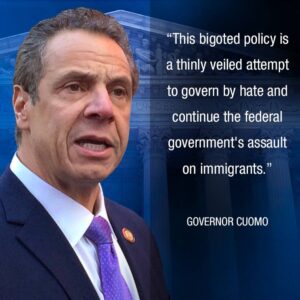 “This is yet another result of one-party extremist control in Albany hurting New Yorkers, and we warned of this impending outcome two weeks ago. As someone who lived through 9/11, I am astonished how Governor Cuomo could disregard the words of 9/11 Commission where they noted, ‘For terrorists, travel documents are as important as weapons.’ The Department of Homeland Security provides many services to New York no provided to other states. Albany must repeal the Green Light Law before the federal government is forced to take further action,” said Representative Tom Reed of New York.