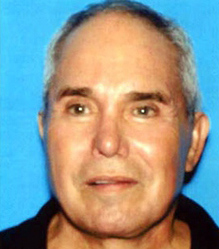 HOLLYWOOD HILLS —On January 17, the dismembered parts of a man were found near the iconic “Hollywood” sign, including his decapitated head. The man’s remains have now been identified, according to police.

Coroner officials have identified the victim as 66-year-old Hervey Medellin, whose residence is believed to be located near the location of the discovery.  Investigators have executed a search warrant at what was believed to be Medellin’s  apartment in Hollywood, however no further details on the investigation have been disclosed as of press time.

The victim’s body parts were initially found by two visitors who had been with their dogs in Bronson Canyon Park, when one of the dogs found Medellin’s head inside a plastic bag.

Additional body parts, including the man’s hands and feet, were later found in the area by more than 120 police officers, firefighters and Los Angeles County Sheriff’s deputies.  Authorities believe that the minimally decomposed body parts were left in the area a day or two before they were found.

A two-day closure had been placed at the park during the search yet the area was reopened on January 20.  The investigation is continuing.

6 Ways To Get Free Legal Help And Advice In California