UNITED STATES—On Friday, June 25,  the U.S. Department of Justice (DOJ) announced they are suing the state of Georgia over their new voting integrity laws.

According to Assistant Attorney General Kristen Clarke, the lawsuit is aimed to stop Georgia from racially discriminatory provisions in its new voting law. 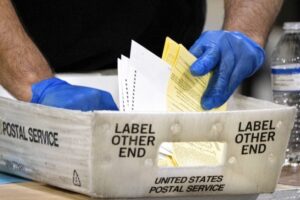 AG Clarke alleged that several provisions of SB 202 were passed with a discriminatory purpose in violation of the Voting Rights Act.

According to a June 25 press release, Clarke indicated that by not allowing unsolicited absentee ballots the state of Georgia was limiting voting access to black voters.

“The provisions we are challenging reduce access to absentee voting at each step of the process, pushing more black voters to in-person voting where they will be more likely than white voters to confront long lines. SB 202 then imposes additional obstacles to casting an in-person ballot,” stated Clarke. “Like all of the provisions in SB 202, the changes to absentee voting were not made in a vacuum. These changes come immediately after successful absentee voting in the 2020 election cycle, especially among black voters. SB 202 seeks to halt this progress.”

The other complaint was that the state shortened the amount of time allotted to request an absentee ballot.

Clarke cited section 2 of the Civil Rights Protection Act, which “prohibits the enforcement abridging the vote on account of race, color or membership in a language minority group,” adding the complaint of those waiting in line being prohibited from having access to food or drink. She included Georgia’s reduction of time allotted to voters to request an absentee ballot.

During the 2020 election and the 2021 run-off election, the Georgia State Election Board allowed voters to drop off absentee ballots in drop boxes. The method of voting was widely deployed in the metro Atlanta area where the largest Black voting age population in Georgia resides.

“This lawsuit is born out of the lies and misinformation the Biden administration has pushed against Georgia’s Election Integrity Act from the start,” said Governor Kemp. “Joe Biden, Stacey Abrams, and their allies tried to force an unconstitutional elections power grab through Congress – and failed. Now, they are weaponizing the U.S. Department of Justice to carry out their far-left agenda that undermines election integrity and empowers federal government overreach in our democracy. As Secretary of State, I fought the Obama Justice Department twice to protect the security of our elections – and won. I look forward to going three for three to ensure it’s easy to vote and hard to cheat in Georgia.”