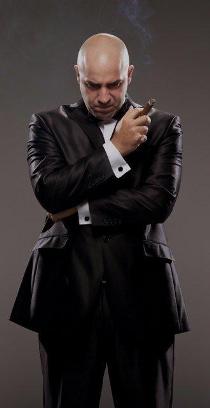 HOLLYWOOD—There are some actors in the business are in the field because it is what they were born to do. Leo DiCaprio, Will Smith, Brad Pitt and Tom Hanks come to mind. Add to the short and distinguished list actor Dominic Pace and you have the newest up-and-coming character actor extraordinaire, who is prepared to take control of the role of Lex Luthor and bring a unique, new side to the famed character’s personality in the “Superman” series. “I would love the opportunity to take over the role that so many before me made great. Kevin Spacey was wonderful as Lex; however, I’d love to take the character to a much darker side, and if given the opportunity, I’d make it my biggest priority,” said Pace.

After his freshman year at Marist College in New York, Pace dropped out to pursue his acting career. He then began studying with members of the Actors Studio Mimi Turque and Susan Batson. He then moved on to William Esper’s two-year program where he studied under Terry Knickerbocker. However, nothing prepared him for the fans of the “Superman” franchise who created a Facebook page in his honor in hopes of capturing the attention of executives at Warner Brothers Studios who are currently in the process of making decisions about casting. “What an honor it was to be the people’s choice,” said Dominic. “Now let’s just hope Warner Brothers’ executives will agree.”

The handsome smoldering star has already placed himself in the hands of the right people. His manager is longtime Hollywood mega manager Burton “Budd” Moss, who has represented stars such as Rita Hayworth, Constance Towers, Sidney Poitier and Tom Bosley. He’s in the process of putting together a full-service team of handlers. With such a creative and strong team behind him, Pace is ready for the next step in possibly taking over the role of the most famous villain in American history. “Lex may be a villain, but I believe there are other sides to the man. He’s not just a monster, he has definite reasons for being the person he is,” said the actor.

With the popularity and such a strong cult following of “Smallville,” which is the CW’s version of a teenage “Superman,” Dominic believes it is because they have put such fresh faces in an old story that made the show a hit. “Look at Tom Welling and the cast. All of [the] cast members in the lead roles were fresh and unknown. There was a clean slate in which to create storylines and have a whole new set of dilemmas for the superhero ”˜Superman’ and Lois Lane.” With the casting of British actor Henry Cavill as “Superman,” perhaps that’s the very path WB plans to take with the new film’s cast? Dominic tells Canyon News exclusively, “I just got a guest starring role in an episode of the upcoming Showtime series  ”˜House of Lies.’ I’m excited about working on the series that stars Don Cheadle.”

Dominic Pace has a huge fan following that would love to see him make his close up as the evil maniacal villain Lex Luther. He’s also hopeful. “Whatever happens is fine. However, I would not be fair to myself, and my belief that I could play the role perfectly, if I didn’t put myself and my hopes and dreams on the line and offer myself for the role. Whoever gets the part will have my blessing, but it would be an honor to have the opportunity to prove that I can do it. Natalie Portman in ”˜The Black Swan’ took a role that had been played many times and made it her very own, and now months later, she’s looking at an Oscar for the part. That’s what Hollywood is all about. We all have dreams and we have to have confidence and the ability to put ourselves out there. That’s the unique thing about our industry, Tommy,” concluded Dominic Pace.