UNITED STATES−Infectious disease specialist, and member of the Coronavirus Task Force, Dr. Anthony Fauci is facing scrutiny from  peers in the field. Fauci, who is a world-renowned immunologist  has been the Director of the National Institute of Allergy and Infectious Disease (NIAID) since 1984.

NIAID is a division of the National Institute of Health (NIH). The Bill and Melinda Gates Foundation financially supported NIAID in the past.

Dr. Judy A. Mikovits and Dr. Ayyaduran Shiva revealed details about Fauci, in an interview in the 80s in an interview with childrenshealthdefense.org. Mikovits, who is an accomplished scientist, noted that Dr. Fauci ordered her “to keep her mouth shut” about her pertinent findings from her research.

When Mikovits refused to stay silent, Fauci confiscated her workbooks, and hard drive from government work and blackballed her from receiving NIH grants ending her science career.

Dr. Deborah Birx, who is also on the Coronavirus Task Force worked together on AIDS research in the early 80s with Fauci.  The pair have been photographed with the Clintons,  Bill Gates Sr., Bill Gates Jr., George Soros, David Rockefeller, and others. 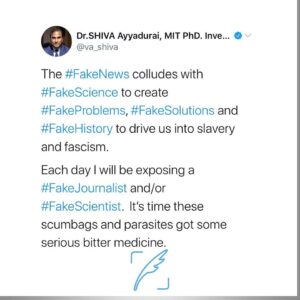 Dr. Shiva, MIT, Ph.D., “Shiva 4 Senate”  started a petition to have Dr. Fauci fired and removed from his position.

“Fauci is on the Leadership Council of the Global Vaccine Action Plan started by Gates Foundation. Who authorized him to join this ‘collaboration?’ This is how people we never elected create Health Policy to force Mandated Medicine. #FireFauci,” posted Shiva on April 17. 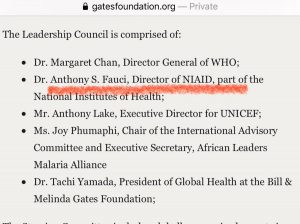 Video footage has been circulating via social media as “Fake News.” The video reveals Fauci allegedly transferred $3.7 million from NIH to the lab to the Wuhan lab in China in 2015 during President Barack Obama’s time in office.

When a reporter asked President Donald Trump about the incident, he indicated he would look into it to make certain that the U.S. was no longer sending grant money to the Wuhan lab.  The Commander-in-Chief has defunded the World Health Organization after they  failed to inform the U.S. of the possibility of the spread of the Coronavirus.  The United States funded a large portion of World Health Organization. Scientists are still uncertain, what was the exact cause of the Coronavirus spreading across the country.

Is Dr. Fauci in trouble over a grant to the Wuhan labs?

At the White House virus briefing yesterday a reporter asked why Dr. Fauci approved a grant of $3.7 million to the labs in Wuhan back in 2015. Apparently, this was after the DHS put a moratorium on any such grants. Do you know what the grant was for? Studying bat viruses. In 2017 the lab was approved by China to begin the tests. Shortly therefater, Dr. Fauci predicted the Trump administration would face a major “surprise outbreak". In 2020 when the “surprise” pandemic hit, Dr. Fauci advised President Trump to shut down the economy. As of yesterday the $3.7 million donation is now under investigation.