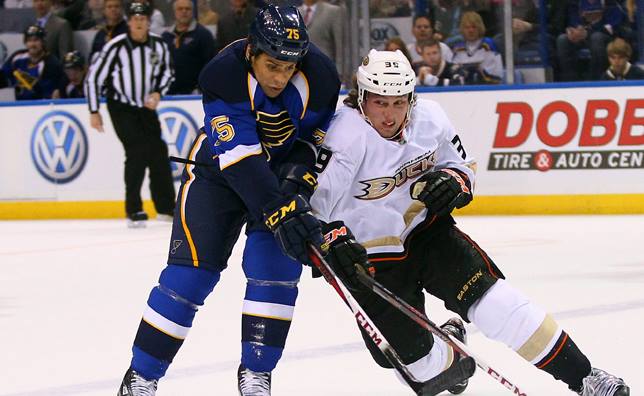 ST. LOUIS—The Ducks found a phenomenal way to win at the ScottradeCenter Saturday night. In just their second loss there, the Blues allowedAnaheim to score four straight with no time to regroup ending in a 5-2 victory for the visitors.

The Ducks got things started with a goal from Andrew Cogliano who graciously took credit for the goal on a shot from Daniel Winnik in which he gained his eighth of the season. Corey Perry added his team leading eighteenth, on a wrister that past the stick side of Blues goaltender Brian Elliot seeing his first game since November 29. Elliot wouldn’t see the last of scoring from the Ducks, as captain Ryan Getzlaf scored his sixteenth on a shot that went over the head of Elliot. The Blues somehow outshot Anaheim12-9, but with Ducks goalie Frederik Andersen looking in better shape than his opponent, the game’s result could yet be determined.

Anaheim nearly put their lead in jeopardy as Sami Vatanen earned a double minor for high sticking just 75 seconds into the second period. It was at the time the Blues took their shots to the net but found no leniency from Andersen to give up any goals. The Ducks made it a 4-0 rout late in the period with Nick Bonino scoring his eighth on a pass from Tim Jackman and Patrick Maroon; both fought for the puck behind the St. Louis net while Bonino made his stance to receive the pass and beat out a struggling Elliot at net.

Anaheim never caught a lead with shots on the net with the third period going the Blues way. Jaden Schwartz got his team out of the whole with a tap of the puck on a wrap around from TJ Oshie giving Schwartz his seventh. Patrik Berglund scored later on a stretch pass from Shattenkirk where the Blues center went one on one with Andersen and beat out their second unanswered. The lead was too much for The Blues to recover from, but that didn’t stop them from pulling out all the stops.

After pulling Elliot off the ice to be replaced with Jaroslav Halak the Blues had no choice to pull their goalie off the ice and go for a miracle. That chance came up short as the Ducks stole the puck on a bad pass where Andrew Cogliano set up teammate Mark Fistric with his first of the season on an empty netter to finish off the Blues.

Andersen completed a great game making 26 saves in his eighth win this season. The Dane’s record of 8-1-0 and .938 save percentage puts him in great position for continued success. The Ducks go back home to prep for a three game homestand spanning a week with the New York Islanders on Monday.